This or That: Is Pumpkin Healthier Than Butternut Squash?

This or That: Is Pumpkin Healthier Than Butternut Squash?

Pumpkin, and the many food and drink variations it’s found in, has become a beloved symbol of fall and culinary sign of the changing seasons. Still, you’d be remiss to ignore butternut, another popular squash known for its sweet flavor and ability to pair well with a variety of herbs and spices, from cinnamon to sage. While both are great options to add to your diet, there are some differences in nutrition, flavor and texture to take into account when choosing between them. 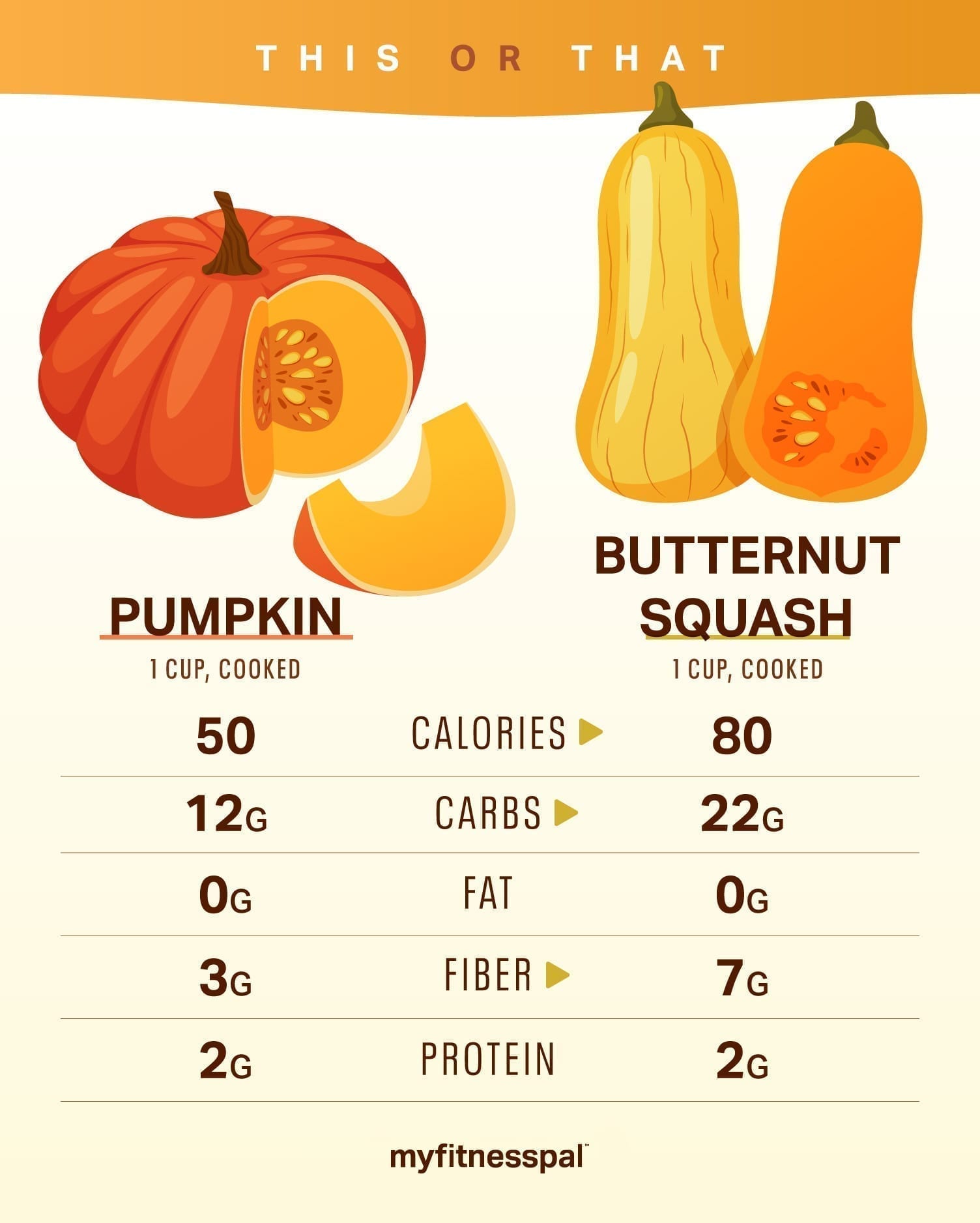 Pumpkin is an excellent source of vitamins A and C, which helps support the immune system. It’s also rich in potassium, an electrolyte that helps muscles function optimally (if you’re low on potassium, you might experience muscle cramps). In addition, pumpkin contains vitamin B6, which is important for nutrient metabolism and the creation of neurotransmitters, magnesium, which aids bone health, muscle and nerve function, and thiamin, which plays a role in the growth and development of cells.

Butternut squash contains slightly more vitamin A and C compared to pumpkin and twice as much iron. It’s also a good source of magnesium, vitamin E and potassium. Compared to pumpkin, it’s higher in calories and complex carbs and contains more than twice the amount of dietary fiber. Since fiber can help keep you fuller longer it may make a difference in the satisfaction factor. More fiber also promotes gut health and a diverse intestinal microbiome, as well as blood sugar control after meals.

Butternut squash is sweeter than pumpkin when cooked, and caramelizes nicely when roasted in the oven, making it delicious as a topping for oatmeal, roasted with your favorite lean protein, or stuffed with quinoa and veggies. Pumpkin has a slightly earthy taste, which pairs well with richer flavors like truffle, bacon and even chocolate. It’s also delicious in beverages like smoothies and lattes, whereas butternut squash is not.

Texture-wise, butternut squash tends to be less stringy than pumpkin, making it a more popular choice for soups and purees, and those who are more sensitive to texture. Still, both can be used in heartier dishes like chilis and curries.

However, pumpkin may be the more budget-friendly option (it costs around $0.24 per pound compared to $1.19 per pound for butternut squash). Not only is it less expensive, but its seeds are also edible and delicious roasted in the oven.

Both pumpkin and butternut squash contain several quality vitamins and minerals that support a healthy immune system and muscle function, for a small number of calories. While butternut squash might be slightly more filling thanks to its higher fiber content, it depends on what you’re making and serving with it. Pumpkin is also slightly cheaper and the roasted seeds make a great snack. Either way, it’s a great idea to stock up on both of these fall favorites and experiment with them in the kitchen while they’re in season.

Discover hundreds of healthy recipes including kale and broccoli via “Recipe Discovery” in the MyFitnessPal app.