Foods for Fullness: The Key to Weight Loss

chevron_left PREV: How Many HIIT Workouts Should ...
chevron_right NEXT: Slow Cooker Chicken and Bean C ...

Foods for Fullness: The Key to Weight Loss When it comes to weight loss and nutrition, how many calories you consume and how much you exercise are two obvious factors to watch. But while a doughnut and several cups of fresh pineapple are roughly 200 calories, not all calories are created equal. There are other important factors to consider beyond calories and macros — where the food comes from, how it’s processed and what’s added to it. The National Institutes of Health recently published a new study that explores the topic.

Here, what you need to know about the study, other research on the topic and how you can use this information to help improve your own health and diet:

Researchers developed a food classification system that separated foods into four categories based on the extent to which they were processed:

WHAT ABOUT PREVIOUS RESEARCH?

One potential reason could be that in this new study, the source of fiber in the ultra-processed diet was not from the food itself. Instead, fiber supplements were added to the beverages because the food was not rich enough in fiber to match the unprocessed diet. Fiber supplements in drinks don’t influence satiety the way fiber in food does, which may have contributed, at least in part, to the overconsumption of calories.

Another piece of the puzzle comes from previous research on the “protein leverage” theory. Humans unconsciously try to eat enough protein to sustain their bodies. If they aren’t getting enough protein, they might increase the amount of calories they eat overall in an attempt to get more protein. Since less protein was consumed earlier in the day, participants may have overeaten later without realizing it was their body’s way of signaling it needed more protein.

Ultra-processed foods like diet soda are often high in artificial sweeteners, resulting in misleading hunger signals. The tongue tastes the soda’s sweetness and expects calories, so the body reacts by releasing enzymes to digest calories. When it doesn’t get them, it makes you hungry, thus you’re more likely to overeat.

No matter where you fall with your eating strategies, this new study shows the quality of calories matter, especially when you’re eating to lose weight. If you’re trying to reduce your overall food intake, you’ll want to optimize the calories you’re eating so you feel full every day. It’s possible eating less might be easier if you stick to whole, unprocessed foods and eat more protein earlier in the day. It’ll be easier to build and sustain healthy habits because your hunger will be more satisfied with your meals.

It’s also important to be mindful of the speed at which you eat. This study illustrates that when you eat faster, you eat more and it’s easier to do so when eating ultra-processed foods. For best results, slow down and enjoy your food without distractions.

Ultimately, while calorie counting and specific macro breakdowns can be helpful in gauging what your body needs, focus on eating whole foods and throw in ultra-processed foods as an exception to your habit. 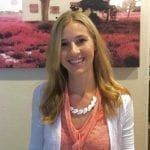 Stephanie (MS, RD) is a Registered Dietitian and is MyFitnessPal’s in-house nutrition expert and nutrition scientist. Passionate for promoting healthy lifestyles, Stephanie graduated from San Diego State University with a focus on research and disease prevention. In the past, she’s worked in cancer research and given nutrition advice to Olympic athletes and U.S. Marines undergoing extreme physical training. When she’s not thinking about food, writing about food, or eating, you can find her cuddling her dogs, on the yoga mat, attached to her snowboard, or climbing rocks.