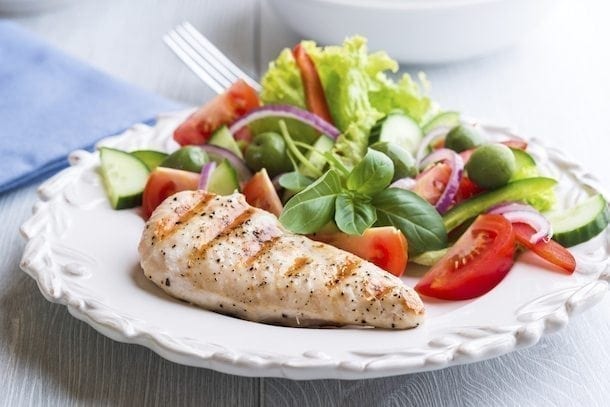 When it comes to eating, there isn’t one diet that works for everyone. Which explains why there are so many eating plans, and why it seems as though a new one is introduced every day. I learned about hundreds of dietary theories when I studied nutrition at the Institute for Integrative nutrition, and I’ve discovered eating is a very personal matter. It’s okay to pick what works for you, and it’s perfectly okay if that means you’re not eating the same way as your neighbor. If you’re interested in exploring, here are 12 of the most common talked-about food philosophies today.

1. Atkins The Atkins Diet was developed in the 1960s by Robert C. Atkins, M.D. However, it took two more decades for the Atkins Diet to gain in popularity. The diet is based on the concept that when carbohydrates are significantly restricted, the body will burn fat for fuel more efficiently. The Atkins Diet consists of four phases, all of which promote high protein and fiber intake, and exclude refined sugar, milk, white rice, white flour, and trans fat.

2. DASH Created in part by the National Heart, Lung, and Blood Institute, the Dietary Approaches to Stop Hypertension (DASH) Diet was designed to prevent and lower high blood pressure by reducing salt intake and incorporating more potassium, calcium, magnesium, and fiber. Emphasis is placed on eating fruits, vegetables, whole grains, lean protein, and low-fat dairy, and avoiding red meat, sugar, and saturated fats. The DASH Diet encourages gradual change and quantifies daily caloric intake based on age, gender and activity level. Simple recommendations include: add a serving of vegetables at lunch and dinner, use low-fat or fat-free condiments, and read food labels to choose products that are low in sodium.

3. Flexitarian A primarily plant-based diet in which eaters occasionally include meat. The Flexitarian Diet encourages eating fresh, natural, and seasonal foods, and according to author Dawn Jackson Blatner, R.D., it is still possible to gain all the health benefits of being a vegetarian while still keeping a small amount of meat in the diet. The plan consists of 1,500 calories, divided into three meals and two snacks, and although meat only makes up a small ratio of the protein the diet contains approximately 50 grams of protein daily.

4. Gluten-Free Gluten is a protein found in wheat, barley, rye, and some other grains. While it’s not problematic for the majority of eaters, a small percentage of the population is allergic to the protein and cannot tolerate foods with gluten.A gluten-free diet excludes foods that contain gluten, including wheat-based breads, pastas, crackers and other pre-packaged items, beer, and occasionally oats—oats are naturally gluten-free, however, they are often processed on machinery that has been contaminated by wheat. Allowable foods include: beans, seeds, raw nuts, eggs, meats, fish and poultry (prepared without breading, batter, or certain pre-made marinades), fruits, vegetables, and most dairy. It’s important to always read labels to be sure food items are gluten-free.

5. Low-Carb While carbohydrates are a major fuel source for the body and an important part of a balanced diet, carbohydrates that are not used for energy are stored in the body as fat. For that reason, a low-carbohydrate diet limits high-carbohydrate foods, including grains, bread, pasta, white rice, baked goods, and soda. Low-Carb diets focus primarily on healthy sources of protein and fat such as meat, poultry, dairy, eggs, and non-starchy vegetables. Though some versions of the diet may allow for fruits and whole grains, generally these are restricted along with beans, bread, sweets, pasta, and starchy vegetables, like potatoes. Popular low-carb diets include: Atkins, South Beach, and the Zone Diet.

6. Macrobiotics Macrobiotics is an eating plan and lifestyle based on ancient Asian principles, introduced to western audiences by Michio Kushi and George Ohsawa, that has been linked to the prevention and treatment of illnesses including heart disease, cancer, and diabetes. The goal of a Macrobiotic diet is to ensure proper nutritional balance, and it consists of 40-60% whole grains, 20-30% vegetables and 5-10% beans and sea vegetables. High in fiber and low in fat, Macrobiotics also encourages eating with the seasons and choosing local and organic foods whenever possible. Foods to avoid include: meat, animal fat, eggs, poultry, dairy, sugar, fruit juices, soda, and all refined, processed, and artificially preserved or colored foods.

7. Mediterranean Considered by many doctors and health advocates to be one of the healthiest diets in the world, the Mediterranean Dietis a collection of dietary patterns that have existed along the Mediterranean Basin for thousands of years. Inhabitants of the region have noticeably lower rates of heart disease, cancer, and diabetes when compared to the United States, Japan, and Canada, attributed to a diet rich in omega-3 fatty acids and low in saturated fats. The Mediterranean Diet consists of natural, whole foods, including whole grains, in-season fruits and vegetables, wild fish, dairy from goats, eggs, a moderate amount of meat, and extra virgin olive oil; the diet excludes processed and refined foods.

8. Paleo The goal of the Paleolithic Diet (a.k.a. Paleo or Primal Diet) is to consume only foods cavemen would have eaten millions of years ago, before the cultivation of grains and legumes, and well before the invention of processed, packaged foods. It’s rooted in the idea that eating natural foods, including game meat, fish, vegetables, wild fruits, eggs, and nuts, leads to optimal health. If a caveman didn’t eat it, it does not exist on this diet! Foods included in most plans: coconut oil, avocados, butter, olives, vegetables, red meat, poultry, pork, eggs and organs (pasture-raised and grass-fed when possible), some fruits, and nuts. Foods that don’t make the cut: refined sugars, fruit juices, cereals, grains, legumes, and dairy (exceptions are made for butter and cream).

9. Raw Food A raw food diet consists of eating foods that haven’t been cooked or processed, such as fresh fruits and vegetables, sprouts, seeds, nuts, grains, beans, dried fruit, and seaweed. It’s believed that heating foods above 115 degrees Fahrenheit depletes nutrients and destroys living enzymes that can assist in the digestion and absorption of food. However, specific food preparation techniques are incorporated to improve the digestibility of certain foods, including sprouting seeds, grains, and beans; juicing fruits and vegetables; soaking nuts and dried fruit; and dehydrating food.While the most common raw food diets also fall under the vegan umbrella, there are other forms, including raw animal products and meat.

10. Vegan A food philosophy and a lifestyle, vegan eaters omit meat, fish, and poultry as well as other animal products or by-products, including eggs, dairy, cheese, and honey. Vegans avoid wearing leather, fur, silk, and wool, and refrain from using cosmetics and soaps derived from animalproducts or tested on animals. Many vegans choose the diet and lifestyle because they are passionate about the ethical treatment of animals. And scientific studies link the eating style to a reduced risk of heart disease, colon cancer, lung cancer, diabetes, kidney disease, hypertension, and obesity. The key to well-balanced nutrition on a vegan diet is variety. Meals can be planned around fruits, vegetables, plenty of leafy green vegetables, whole grains, nuts, seeds and legumes.

11. Vegetarian A Vegetarian Diet is a plant-based diet that excludes meat, poultry, and fish. Most vegetarians consume dairy products, and some eat eggs. Vegetarians who consume both eggs and dairy are referred to as lacto-ovo vegetarians, while those who eat dairy but not eggs are lacto vegetarians. Vegetarian diets are rich in fruits, vegetables, nuts, seeds, legumes, and whole grains. A balanced vegetarian diet is often low in fat and cholesterol, which decreases the risk of heart disease and diabetes and aids in combating obesity and obesity-related diseases.

12. Volumetrics Volumetrics is a plan that focuses on eating fewer calories without having to eat less food. Developed by nutritionist Barbara Rolls, Ph.D., volumetrics encourages eaters to choose foods that have a low caloric density, such as fruits, vegetables, lean proteins, non-fat milk, and broth, and avoid high density foods, including fried chips, cookies, nuts, butter, and oil. Low calorie density foods tend to have a high water and fiber content, which contributes to a feeling of fullness. There is no calorie counting on this diet, however, a basic knowledge of calorie density is needed and the plan stresses the importance of food tracking.

Is your food philosophy on this list? Tell us about your eating style in the comments below.