Can Coconut Be Healthy?

chevron_left PREV: What up to 20 Grams of Protein ...
chevron_right NEXT: Curried Cauliflower Soup With ...

Can Coconut Be Healthy? We’ve shown how carbohydrates like bread, rice and pasta can be a nutritious addition to your diet, despite often being labeled as “bad.” When it comes to fruits, another buzzy food that gets a lot of mixed messages is coconut. Here’s what you need to know about coconut, coconut oil and coconut water. 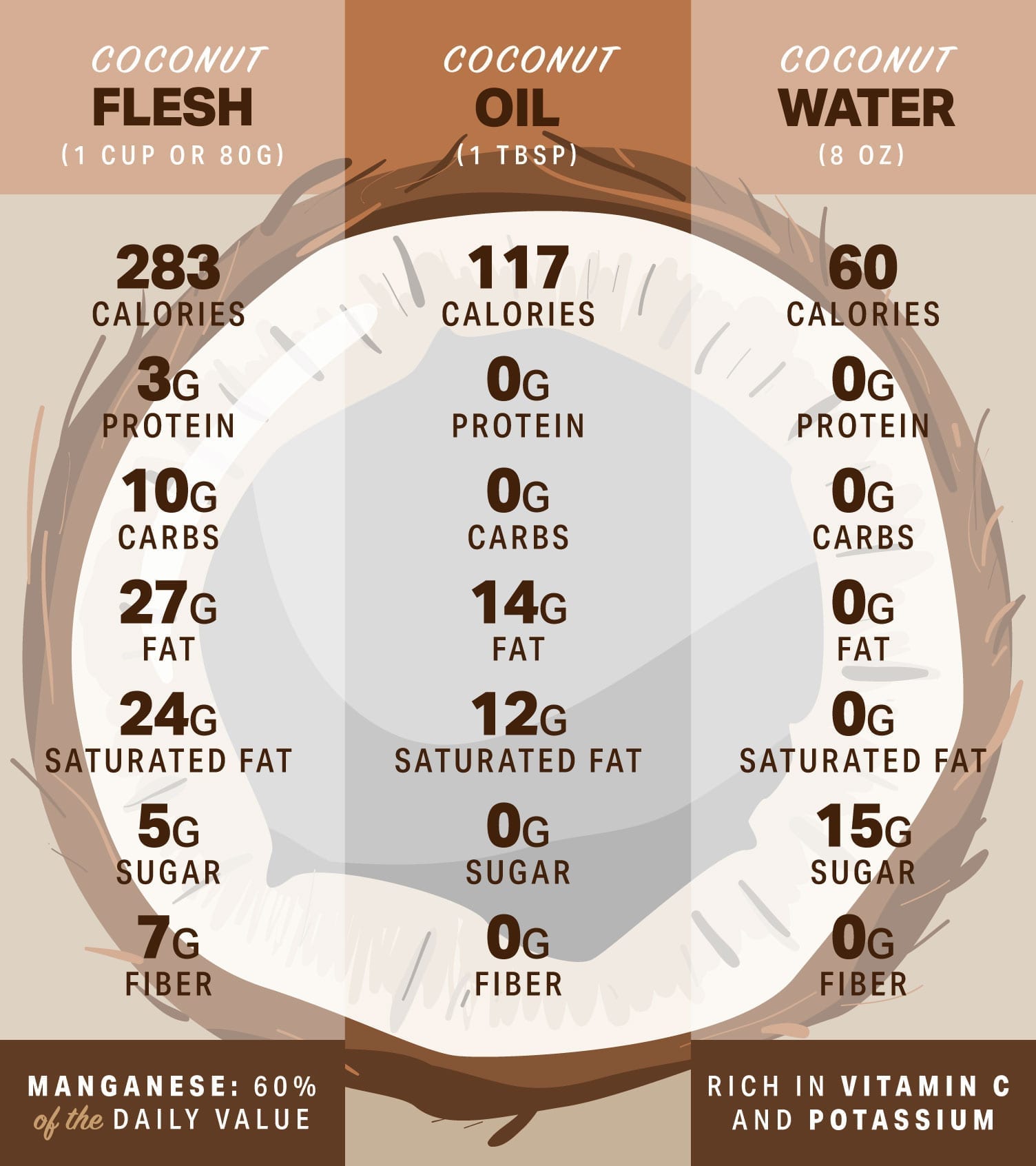 The white “meat” or flesh of a coconut is a good source of fiber and important minerals such as manganese (which helps counter inflammation in the body) and selenium (which aids sleep). Coconut water has also become popular, touted as a hydrating beverage.

WHY COCONUT GETS A BAD RAP

Coconut is unique in that it is high in saturated fat, with coconut oil consisting of approximately 90% saturated fat. Saturated fat is the fat typically found in animal products, which is solid at room temperature and often linked to an increased risk of elevated cholesterol and cardiovascular disease. However, before we start categorizing coconut oil with cheeseburgers and ice cream (both delicious in moderation), there’s more to the story. The saturated fat in coconut oil is made up primarily of medium-chain triglycerides (MCTs), which are much more quickly absorbed by the body than the typical, longer chain saturated fatty acids found in most animal products. Because of this structural difference, we can use MCTs more easily for energy and are less likely to store them as fat.

Similar to research on saturated animal fats, studies to date have shown the saturated fat in coconut may still increase LDL cholesterol and risk for cardiovascular disease, despite the difference in structure and myriad health claims. What’s more, replacing coconut oil with an oil rich in unsaturated fat, such as olive oil, may help decrease the risk of cardiovascular disease and LDL cholesterol.

While coconut water is a good source of potassium (helpful for athletes who lose these electrolytes via sweat), it’s important to think about the added sugar content. Most 8-ounce containers have upwards of 15 grams of sugar, which is more than half the recommended daily limit (26 grams per day).

THE BENEFITS OF PLANT-BASED EATING

Research has found following a plant-based diet may help reduce the risk of a variety of diseases, such as cardiovascular, Type 2 diabetes and some cancers. Coconut-based products like milk and yogurt have become increasingly popular for those individuals trying to avoid dairy because they are substitutes for dairy-based counterparts. To be clear, my definition of a plant-based diet is not a plant-only diet, and can absolutely include dairy products if you can tolerate them. But for those with allergies or intolerances, coconut-based products can be one of the many alternatives.

In addition to saturated fat content, another important nutritional detail to keep in mind if you’re thinking about substituting coconut milk or yogurt for a dairy-based option is protein. A 5.3-ounce container of coconut yogurt contains less than 1 gram of protein, versus Greek yogurt of the same size, which contains around 15 grams of protein. This is a substantial difference that could leave you feeling unsatisfied if coconut yogurt is the base of your meal or snack, since we know protein is a superstar for promoting satiety.

Ultimately, what’s more beneficial is thinking about the diet as a whole over time, rather than one type of food in a vacuum. If you’re consuming all coconut products, all the time, the chances are your diet is not going to be healthy. Although that may be due in part to saturated fat or added sugar content, depending on the product, it’s more about what might be missing — fruits, vegetables, whole grains, lean proteins, etc. So my answer here is just like any other food: Coconut products can be healthy in the context of a varied diet that makes room for indulgences.