A phrase I often hear from new clients is “OK, so I stopped eating bread.” Many people mistakenly think giving up carbs, and specifically bread, is the first step to better health. However, this couldn’t be further from the truth.

Here, why bread is often vilified, the reason carbs are essential for good health and what to look for when buying bread.

WHY BREAD GETS A BAD RAP

Bread dates back to the ancient Egyptians and for centuries was the main source of calories in the diet. It picked up even more steam during industrialization, which made mass production possible. Bread was still living its best life in the ’70s, ’80s and ’90s when a low-fat diet was heralded as being the top dog for health and weight loss. It met its match in the 2000s, however, when a combination of the Atkins (or very low carbohydrate) and gluten-free diets rapidly gained popularity. As a common source of carbohydrates and gluten, both diets shunned bread, and it wasn’t long before bread developed the undeserved reputation of being “bad,” “unhealthy” or “fattening.”

Here’s how a slice of traditional white bread compares to a slice of 100% whole-wheat bread. Because the former is more processed, there is more sugar and less fiber and protein compared to the latter. 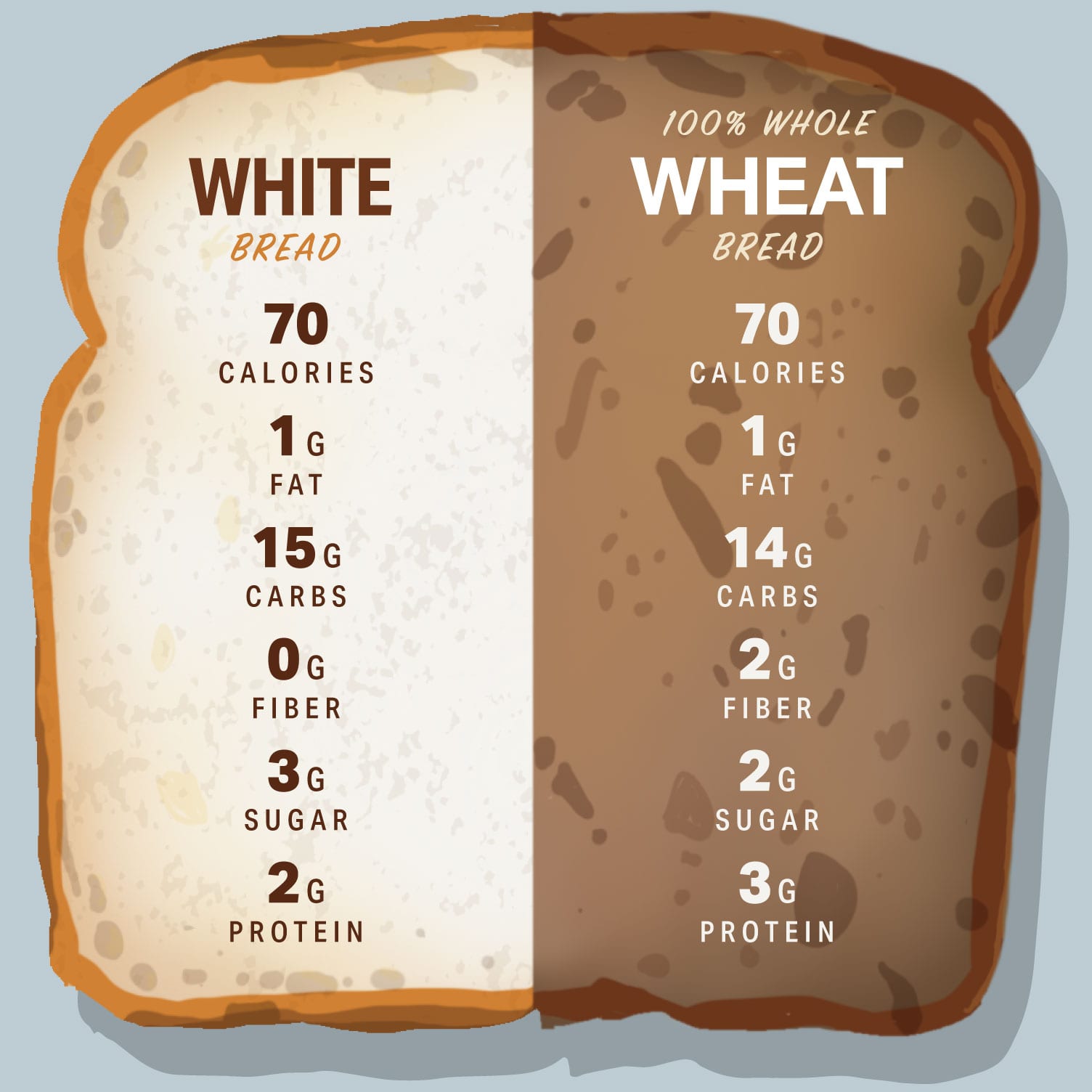 WHY YOU NEED CARBS

Despite the growing prominence of fad diets like keto, (which also calls for low carbs), carbohydrates found in bread are an essential nutrient and the body’s preferred source of energy. In fact, the brain alone needs 130 grams of carbohydrates per day to operate optimally. Not getting at least this much on a regular basis may negatively affect cognitive function and energy levels.

While the standard American diet may consist of too many carbohydrates, many of which are refined, meaning processed carbs that lack nutrients like vitamins and minerals. But this doesn’t mean all carbs (including bread) should be avoided. It just means arming yourself with the knowledge about how to choose more nutrient-dense types.

WHAT TO LOOK FOR IN BREAD

Grocery store shelves have a plethora of bread options these days, which is why it’s important to know what to look for on the nutrition labels. Two of the most important nutrients to keep in mind are fiber and protein, since they help slow digestion, keep you full and satisfied after meals and stabilize blood sugar levels. Choose bread that has at least 2–3 grams of fiber and 3–4 grams of protein per slice.

You should also look at the ingredients list and choose one that has “100% whole wheat” or “100% sprouted wheat (or other grains)” listed first, as this is also a good indicator the bread is going to be more nutrient-dense. A simple ingredients list is always a plus, but I recommend not having too much stress about it as long as you’re avoiding breads that contain added sugar like high-fructose corn syrup or “light” versions, which are typically not as filling and contain more junky, processed additives.

I always recommend eating the type of bread you like the most and that helps you feel satisfied. If you’re feeling adventurous and want to explore some different options, here are a few great types to try:

These breads are made from grains that have started to sprout, which increases nutrient content. Sprouted-grain breads typically have more fiber, protein and B vitamins compared to a standard white or whole-wheat bread. They also have a uniquely hearty, nutty taste due to the variety of sprouted grains and legumes (Think: wheat, barley, soybeans, lentils, etc.) used to make the bread. Because of the higher protein and fiber content, sprouted-grain breads may also be more satisfying and keep you full longer.

Unlike traditional breads that use baker’s yeast, sourdough fermentation relies on the reaction between wild yeast and lactic acid bacteria naturally present in flour to leaven the bread. This takes a bit longer, and is the reason for sourdough’s unique texture and flavor. Because the lactobacilli may lower the pH of sourdough bread and help degrade a compound called phytic acid, (which typically binds to vitamins and minerals blocking their absorption), micronutrients like zinc and potassium may be more available for the body to use.

The fermentation process may also help degrade gluten (a protein found in wheat) and make the bread easier to digest for those with gluten sensitivities. It may also reduce the bread’s glycemic index, meaning you’re less likely to experience a blood sugar spike after eating a slice.

Brands to try: Pick up a loaf from a market bakery or your local farmer’s market.

When the first ingredient on the label says “100% whole-wheat flour,” it means the bread was made from grains that include the nutrient-rich bran and germ. In traditional white breads, these are stripped from the grain before processing, which diminishes the nutrient content. Because they are made from the entire grain, 100% whole-wheat breads typically have more fiber, protein and B vitamins compared to white breads, giving you a bigger nutritional punch per slice.

No food should be off limits and everything can fit into a healthy, well-balanced diet. Bread can be a great, healthy carbohydrate choice that can be even more nutritious if you look for the varieties mentioned above that contain more protein, fiber and micronutrients.