What’s the Difference Between Tofu, Tempeh and Seitan?

What’s the Difference Between Tofu, Tempeh and Seitan?

Before plant-based burgers, nuggets and sausages hit it big in the mainstream, there were three main plant-based ingredients vegetarians and vegans counted on for their “meat” fix: tofu, tempeh and seitan. All three are good sources of vegan protein, and are versatile enough to use in many different meals. They’re still popular among plant-based eaters and omnivores alike, but they’re not necessarily interchangeable. Confusion remains about how they’re made and what to use them in. 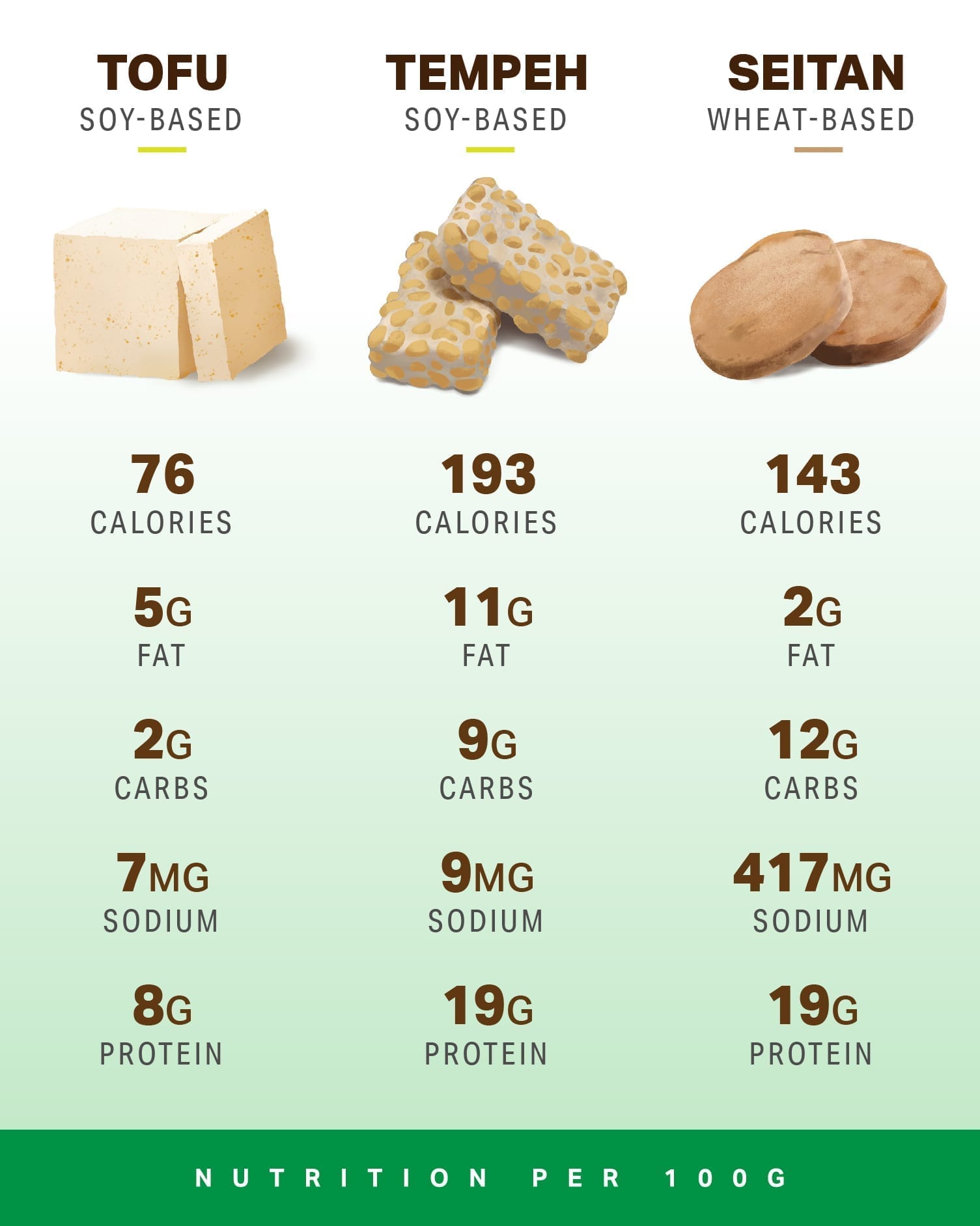 Here, we break down what you need to know about these different meat alternatives:

Tofu is made from soybeans that have been processed into milk and then into blocks.

Probably the most widely available of the vegetarian proteins, tofu is a soy product sold in solid white blocks. It’s made by soaking dried soybeans in water, breaking them apart and then boiling them. Similar to how almond milk and other non-dairy “milks” are made, the boiled bean pulp is strained out and soy “milk” remains. The milk is poured into molds with natural thickeners and eventually sets into a protein-rich block.

Cooking tip: At the grocery store you’ll see tofu sold in different textures — silken, firm, extra firm — that correspond to how dense the tofu is. Generally, firmer varieties are best for sauteing, roasting and grilling, whereas silken tofu is good for blending into smoothies or adding to soup. What’s more, tofu is virtually flavorless, which can actually be a real asset, because it soaks up the flavor of whatever you cook it with.

Tempeh is made from whole, fermented soybeans, which is why it has a heartier texture and more flavor.

Although tempeh and tofu are both soybean derivatives, they have distinctly different textures and flavors. Tempeh, thought to have originated in Indonesia, is less processed; it’s made by lightly fermenting whole, cooked soybeans, then letting them set into a dense block. Unlike a block of tofu, a block of tempeh is full of whole soybeans, so it’s got much more bite. Also, thanks to the fermenting process, the flavor is earthy and a little bit funky (kind of like mushrooms).

Cooking tip: When it comes to cooking, tempeh can be crumbled and used as a ground meat substitute, cut into cubes and tossed into a stir-fry or even marinated in smoked paprika and seared in strips to make vegetarian “bacon.”

Seitan (pronounced say-Tan) differs even more from tofu and tempeh because it’s made from wheat gluten as opposed to soy.

A lesser-known vegetarian protein, seitan is made from gluten, the protein in wheat that gives bread its springy texture. (While it is a healthy plant-based option for most people, those with celiac disease or gluten-sensitivities should avoid it.) To make seitan, wheat flour is mixed with water and kneaded until a sticky dough forms. It’s then washed to remove the starch so only the protein is left. You can buy it ready-to-cook, or buy dried wheat gluten and mix it with water yourself. One thing to note is that most store-bought seitan is seasoned with salt and other ingredients, so beware of the sodium content before cooking.

Cooking tip: Because of its dense, slightly spongy texture, seitan makes a great meat substitute. Use it in place of beef in fajitas or cheesesteaks or in place of chicken in stir-fries.

Although there has been debate about the health effects, the body of research shows both soy and gluten can be healthy additions to most people’s diets, provided you do not have an allergy.

If you’re looking to pack in lots of protein, tempeh and seitan are better choices. If you want a lower-calorie option that will take on whatever flavor you add, tofu is your best best.