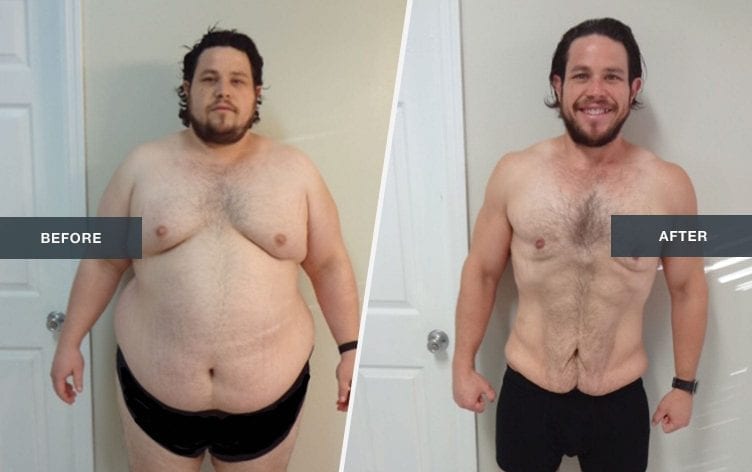 The moment the lightbulb went on for Eric Naiman was when he was literally staring himself in the face. In the fall of 2014, he was putting in 60- to 70-hour weeks managing a restaurant in Orlando. He was stressed and exhausted, using his limited free time to unwind by eating and drinking socially. With all those factors combined, he found himself weighing close to 400 pounds.

“I remember waking up one morning, feeling like total crap,” he recalls. “I looked at my face in the mirror and said out loud, ‘How did I get here?’” That’s when the revelation hit him: “I can’t do this anymore,” he remembers thinking. “I have to do something else.” That marked the beginning of Naiman’s journey. He was lucky in that he had had enough — “I was ready to make a change,” he admits. But he also had an accountabilibuddy in his friend and soon-to-be-roommate Paul Antonelli, who had a degree in exercise physiology and had lost 70 pounds with MyFitnessPal. With Antonelli’s help, Naiman set a weight-loss target of 176 pounds. The early strategy was simple: overhaul his diet, log it all on MyFitnessPal and get his steps in to stay moving. Every day, he would take a photo of himself to track his progress and hold himself accountable.

When he saw the “two pounds per week” strategy was starting to work, he had another revelation. “How cool would it be,” he thought, “to show my family the actual shrinking?” So he began building a time-lapse video of his transformation, day by day, through his entire journey.

“You look at folks’ before-and-after photos,” he explains. “The before always represents, ‘He’s not going to be able to do it.’ The after is always,’I can’t believe he did it.’ The interesting thing to me was the in-between, the journey.”

Naiman has taken the entire trip: In just over two years, he has dropped all 176 pounds, and also added muscle thanks to rigorous training at Orangetheory Fitness. He’s even won a handful of weight-loss competitions held by the trendy health-club chain. But he’s found something even more important: his self-respect. What you’ll see below is the fruit of Naiman’s labor: a five-minute video he put together that features a time-lapse of all 758 progress photos taken over 25 months (through this past February), and some of his most important revelations along the way. He hopes that his work will help inspire others who are overlooked to make the changes they need to to feel good about themselves.

“Most people, when they look at an obese person, they keep on looking,” he says. “They barely see them and don’t give them much attention — unless you’re on an airplane with them, or if they get kicked off a ride at Universal Studios because they’re too big. With this video, I hope [obese] people can see that these are the things you can achieve. You’re seeing the moments and seeing me shrink.”

And that’s the philosophy he wants to pass along: “You have to be willing to take many small steps. If you had told me that two years ago, I wouldn’t have wanted to do it. But if you do that, you get a series of small results.”

And that’s what making a big change is all about.