chevron_left PREV: Everything You Need to Know Ab ...
chevron_right NEXT: Tropical Smoothie While sugar substitutes (like stevia, Splenda, Equal and Sweet’N Low) may seem like an enticing way to save calories, there’s still a great deal of confusion and a lack of consensus about their purported health benefits. No-calorie sweeteners are typically hundreds of times sweeter than regular table sugar and metabolized differently by the body. While all sweeteners are classified as food additives by the FDA, only stevia and monk fruit are considered GRAS (Generally Recognized As Safe) by the FDA when used as an ingredient.

Here, what you need to know before adding sugar substitutes to your next drink or meal:

A recent review of 56 studies found no significant outcomes in weight loss among adults drinking beverages with non-sugar sweeteners versus regular sugar. The review was conducted by a nonprofit international research group on behalf of the World Health Organization (WHO) and published in the British Medical Journal. There was no significant evidence of any effect of non-sugar sweeteners on adults actively trying to lose weight.

Research points to increased weight gain and adiposity in animals consuming saccharin or aspartame. There are also questions about whether artificial sweeteners may affect or increase cravings and normal food intake.

“One risk of using artificial sweeteners is the false sense of calories they provide, essentially tricking the brain without supplying the energy,” explains Rachel Fine, MS, RDN. “Since artificial sweeteners are much sweeter than table sugar, people may be more likely to crave sweeter foods as their tolerance to sweetness increases.”

Similarly, if people know certain foods and beverages have fewer calories, they may overcompensate by indulging in other less-healthy foods.

THEY MIGHT CAUSE LESS OF A BLOOD SUGAR SPIKE …

… BUT THEY COULD HARM GOOD GUT BACTERIA

Preliminary studies done in mice have suggested alterations to the gut microbiota, which may be responsible for roughly 70% of our immune system, points out Kelly Jones, RD. We also know our gut health can affect many other things, including digestion, metabolism, mood, chronic disease and more.

“While occasional consumption of small amounts of artificial sweeteners likely won’t pose a risk, those suffering from digestive problems and blood sugar dysregulation may want to consult with their healthcare team,” says Jones.

Overall, it’s important to have a well-rounded diet that places an emphasis on a healthy balance of macronutrients (protein, carbs and fat) and minimizes added sugars and no-calorie sweeteners. 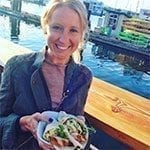