How Erica Lost 160 Pounds After Yo-Yo Dieting For Years

chevron_left PREV: Is Walking or a Workout Better ...
chevron_right NEXT: Hydrating Foods to Quench Your ...

How Erica Lost 160 Pounds After Yo-Yo Dieting For Years 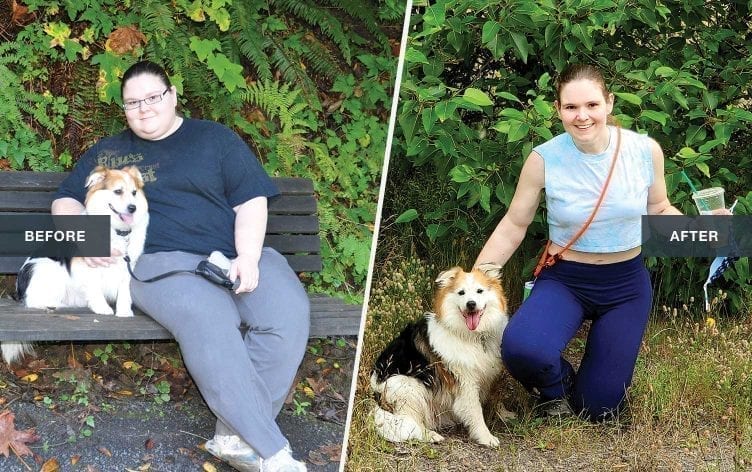 Eighty pounds lost, then 100 pounds gained. Twice. That was the history of 35-year-old Oregon resident Erica Kennett in her attempts at weight loss. As it turned out, her third effort, however, on that roller coaster would be the charm — and the endpoint.

Kennett had struggled with her weight her entire life, with awareness of the problem beginning around age 6. At age 9, a doctor put her on her first diet and she spent years bouncing from one eating plan to another. About three months before her high school graduation, she decided to try a “crash shake diet” that reduced her calories considerably

While it worked initially, and she lost 80 pounds, eating normally once she got to college caused the weight to come back, plus 20 more pounds. A few years later, she and her husband decided to take a joint approach to weight loss. Already diagnosed with high blood pressure and diabetes at 21, Kennett wanted to do as much as she could to get healthy.

They began tracking food and sticking to very low-calorie goals. Again, she lost 80 pounds. But as soon as she stalled and plateaued at that weight, Kennett felt frustrated and defeated.

“That’s the point where my motivation would just disappear,” she recalls. “As everyone who’s struggled with weight loss knows, mindset is everything. So, when I didn’t have the motivation to keep going, that’s when the weight came back on.”

Just as she did in college, she gained 100 pounds. But this time, the ramifications were more serious. It meant she needed to start injectable medication for her diabetes.

“As much as I’m a fan of body positivity, I hated my body, and nobody wants to take care of something they hate,” she says. “It was hard for me to realize that if all those health reasons weren’t enough to motivate me, maybe it was an issue of more than just motivation. I really felt like I was destined for failure if I kept doing the same things that didn’t work for me long term. This was a low point, but I hadn’t given up.”

After watching a documentary about weight-loss surgery that noted only 5 percent of people with a BMI over 40 are able to maintain a significant weight loss, Kennett felt something click. She knew surgery isn’t a shortcut or “cheating,” as she’d heard some people assert — instead, it could be the tool she needed to be more successful.

“I felt like surgery would be a powerful starting point,” she says. “I wanted to see if it could help motivate me in a different way by giving me a power tool I didn’t have before. I never saw surgery as some magical weight-loss fix, because it’s not — for any tool to work, you have to pick it up and use it. But it is a way to focus your efforts when you haven’t been able to do that before.”

Turns out, she was right. To prep for the surgery, she was asked to attend six months of appointments and classes with different medical providers. In those months leading up to surgery, she set a personal goal to lose 80 pounds — the number she was oh-so-familiar with by now. But this time, instead of drastic calorie-cutting, she decided to change her eating habits to be as healthy as possible for the surgery and recovery.

At 303 pounds, Kennett started using MyFitnessPal and really paid attention to what she was eating to lose weight, not just the amount of calories each food contained. The work she did in the six months before surgery was one of the hardest things she’s ever done, she says, but using the app made her feel like all that effort was worth it — and it was paying off.

“I started eating vegetables for the first time in my life,” she jokes. “I just wanted to establish good habits with healthy options that could make my recovery easier. And that’s exactly what ended up happening.”

After having gastric bypass surgery in 2015, she was surprised by feeling strong and even hungry very soon after the surgery. She’d been told many people struggled with nausea, but because of her focus on solid habit-building and food-tracking, she believes she was able to experience a particularly easy recovery and go right into what she wanted most — to feel on track with living a healthier life.

Her husband ended up having surgery about two weeks after her, and they worked together to lose the weight at a sustainable pace. They took hikes with their dog and tracked their meals together, and Kennett lost another 80 pounds over the next year. But then, with a series of challenging life events, her weight began to go up again. Tragically, her husband took his life in April 2018, which caused her to re-evaluate many things, especially how she treats herself.

“The motto I live by is that it’s OK to be a ‘B-student,’ and not strive for perfection, because that’s what I chased for so long, and it worked against me,” she says. “I think self-compassion has been crucial for going through everything, especially in these last few years. Because now I’m finally at the point where I want to take care of my body better. I want to be happy, and I’m getting there.”

Today, she weighs 142 pounds, but it’s not the number that makes her feel like progress — it’s her positive mindset that she sees as the real change.