How a Nutritionist Spends $50 at Walmart

chevron_left PREV: 6 Foolproof Secrets for Better ...
chevron_right NEXT: The Do’s and Don’ts of Bui ...

How a Nutritionist Spends $50 at Walmart 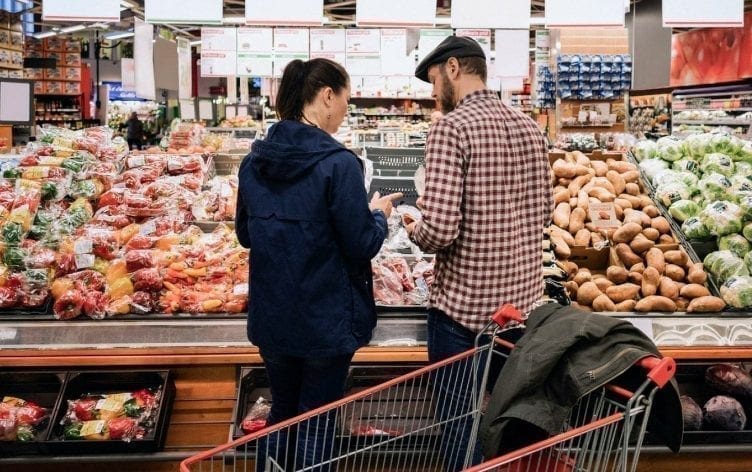 With 5,000 plus stores and counting, Walmart is a big discount retail chain with a presence in every corner of America. Millions of shoppers go to Walmart for everything from big-screen TVs to lawn chairs, DVDs, shampoo and, of course, groceries. “Healthy” may not be the first word that pops into your mind when you think of Walmart but budget might be. With a good game plan you can walk away with a wholesome haul while saving moola!

We sent a nutritionist to Walmart with $50 to see what she came out with. Unlike specialty stores such as Trader Joe’s, Walmart is ideal for staple foods like bread, beans, fruits, veggies, herbs and spices. Here, you can stock up on kitchen basics that will get you through the week and beyond.

Walmart is considerate of the cost-conscious shopper. They list the total price and the “price-per-ounce” to help shoppers compare different items and figure out which is the best bargain. Their store brand, Great Value (GV), offers a wide selection of items at a lower price. Here’s a cost-efficient way to get whole-grains: a loaf of “100% whole-wheat” bread. It costs less than the popular sprouted-grain breads made with nuts and seeds and is a good base for everything from avocado toast to tuna sandwiches. Honey and other sweeteners are on the ingredients list, but I don’t mind because it contributes to the bread’s softness and moisture. Did you know, frozen fruits and vegetables are often just as nutritious as fresh? Fresh produce often travels thousands of miles before reaching the store. Freezing said produce helps lock in valuable vitamins and minerals, which is why I stock up on these frozen broccoli florets. Surprisingly, they were a few cents cheaper per ounce compared to fresh broccoli, which still had the stalks on. A bonus: They’re more shelf-stable, too. Walmart’s GV line has many organic canned products to choose from. I bought three cans — black beans, corn, garbanzo — to mix after rinsing and draining to get rid of the extra sodium. I store this mix in the fridge and add it to cooked rice, salads and soups to bulk up my meal. Beans and whole-kernel corn are a great way to get vitamins and fiber! A one-pound box of whole-wheat pasta is a steal at less than a buck each. Whole-wheat pasta is a great way to get whole-grains and fiber. For those who can’t tolerate gluten, try Lensi Pasta made with black bean, chickpea or lentil flour. They’re lower in carbs, and pack more protein and fiber per serving. Fair warning: It is pricier at $0.34 per ounce compared to $0.06 for whole-wheat pasta, though. Sure, it’s cheaper to buy oatmeal in bulk and DIY your own mix, but I like having flavored oatmeal packets just in case I’m having a really lazy morning. I will mix in 2–4 tablespoons of dry oatmeal with each packet before cooking because I like a heartier breakfast. Walmart’s GV version of flavored oatmeal is less expensive than the brand name version, which sells for $0.25 per ounce. Choose from apple cinnamon, maple sugar or berries and cream. Admittedly, fresh salads can get pricey, but I like my leafy greens. My work-around is to buy a big tub of spring mix salad or large bag of baby spinach. It’s cheaper than salad kits. To curb food waste, I’ll use salad greens in smoothies if they’re not perky enough for salads. A good dressing goes a looonng way! Kraft’s raspberry vinaigrette is just right — not too tangy with a hint of sweetness. Despite the bright color, this dressing uses no artificial colors such as red 40. At just 30 calories for two tablespoons, this is a low-calorie dressing. They’re a splurge compared to potato chips but these baked goodies aren’t as addicting (at least not for me). I munch on them sparingly as a snack along with hummus and baby carrots. I also like to use them as croutons and crumble them over salads. These frozen Greek yogurt bars are my stand-in for regular ice cream, but to be honest I own both. Yasso bars are great when I want something cold and sweet but light. One bar contains about 3 teaspoons of sugar and 5 grams of protein. The chocolate bits mixed into these bars make them that much more decadent. This splurge is also a healthful investment. You get four pounds of frozen strawberries for less than $10. Frozen strawberries are a low-sugar fruit, which is why they’re perfect for protein smoothies since most protein powders already come pre-sweetened. My post-workout smoothie obsession at the moment is 1/2 scoop of vanilla protein powder, 1/2 teaspoon of matcha powder plus water, spinach and frozen berries. Given the constraints, I’d still set aside at least $3 for fresh fruit by buying whatever is cheap and in-season. The trick is to look for fruits costing around $1.50 per pound. While it depends on the time of year, apples, bananas and oranges consistently cost less than other fruits. Steak seasoning isn’t just for the grill — I use it as a marinade for any lean protein or chopped veggies (e.g., potatoes, asparagus, Brussels sprouts) bound for the oven. Be careful when seasoning with this mix because it already contains salt. You can’t have pita chips without the hummus. Sabra makes a variety of flavored hummus including roasted garlic, sun-dried tomato and basil pesto, which are a few of my favorites. I’ll admit that you can make plain hummus (and certain flavors) for much less, but flavored hummus is a different story unless you already have all the necessary ingredients at home. What’s your favorite item at Walmart? Share it in the comments below.