From Wheelchair to Gym: How Cesar Lost 185 Pounds

From Wheelchair to Gym: How Cesar Lost 185 Pounds 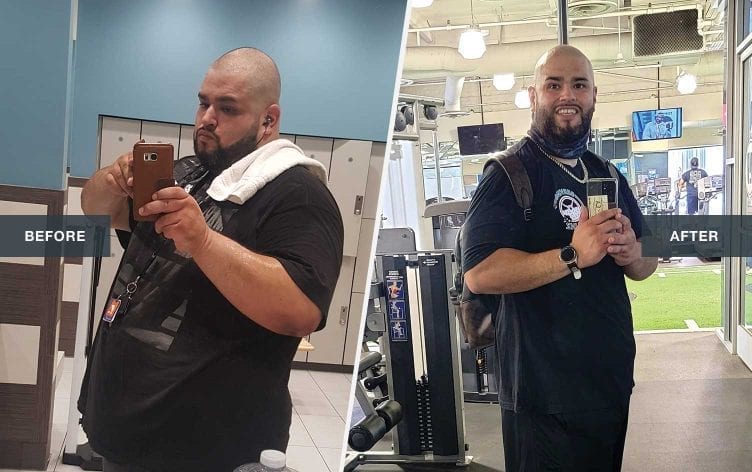 Cesar Salazar was 31 years old when an injury placed him in a wheelchair. He was working in the parts department of a car dealership in Houston in 2014 when a small accident damaged his lumbar spine and pinched his sciatic nerve, leaving him nearly immobile from the waist down.

“The doctor told me the injury was due to me being too heavy, not just the accident,” says Salazar. “They couldn’t operate, so I just needed to rest and heal. I ended up staying in that chair for eight months.”

Salazar’s immobility, paired with unhealthy eating habits, caused him to gain more weight, and he reached nearly 500 pounds at his heaviest. “I was watching ‘My 600-Lb Life’ on TV and realized I was only 100 pounds away from that point,” he says. “I knew I needed to make a decision and get out of the wheelchair.”

In summer 2015, Salazar moved to California to be near his brother and father, who acted as his support system. He began walking again, taking small steps over short distances. He got a new job with a construction company, which required him to walk quite a bit, plus climb staircases at construction sites. Luckily, the extra movement helped increase his mobility and stamina. This was a solid start, but in June 2017, Salazar downloaded the MyFitnessPal app, and his progress took off.

“MyFitnessPal was my biggest tool,” he says. “I knew nothing about accountability before then. I just wanted an app where I could count calories.”

Before using MyFitnessPal, Salazar’s diet was fast-food heavy, with lots of pizza, burgers and fries, plus multiple sodas per day. He says he turned to food to celebrate or comfort him, whether he was having a good day or a bad day. By logging his meals, Salazar quickly learned the importance of nutrition, and he realized the impact of what he ate on his weight and how he felt physically and mentally. This awareness helped him make impactful changes to his food habits.

Now, he starts the day with a protein shake and heads home for lunch, usually cooking beef or chicken in a skillet and adding it to a sandwich with peppers and avocado on low-calorie keto bread. At night, it’s another protein shake and sometimes a piece of toast with peanut butter. “I don’t get hungry because I eat plenty of protein,” he says. Salazar also stopped drinking alcohol because he noticed he made worse food decisions after drinking.

Changing his diet brought results sooner than he imagined, and Salazar began to lose 1–2 pounds per week.

Around the same time, he joined a gym. He hopped on an elliptical machine, starting with eight minutes of exercise, then 10 minutes and 15 minutes, eventually working his way up to an hour. He also used the stationary bike and walked, strengthening his legs, lungs and heart. The exercise paired with his new diet ramped up his weight loss, and he began to shed 4–5 pounds per week.

Today, Salazar carries about 315 pounds on his 6-foot-3 frame — that’s a total weight loss of about 185 pounds from where his journey began. His pants size plummeted from 54 to 38, and he dropped his body fat percentage from 51 to 29. He goes to the gym six times per week, using a push/pull strength-training routine that has helped him build muscle. And though his weight loss has slowed as he’s gotten lighter, he is still losing about a half-pound each week and hopes to get down to 265 pounds.

He says going to the gym has become a passion, a hobby and a priority. “I don’t get tired now, physically or mentally. I have so much more energy.”

Salazar credits his transformation to the support of his family, MyFitnessPal and realizing that he can accomplish anything through hard work and determination.

“You’ve got to believe in yourself,” he urges. “A lot of us will see a challenge, and before we even start, we mentally give up. If you don’t try it, you’ll never find out if you can do it.”

He is regularly contacted on social media by people asking for advice on making changes of their own. His first suggestion: Download MyFitnessPal and begin to understand your personal nutrition needs and daily calorie budget. And he advises anyone to add him as a friend if they want guidance or a friendly source of assistance.

“I’ve been in that dark place, where you are embarrassed to tell people your story,” he says. “I wasn’t proud of any part of me 5 or 6 years ago. Now, I look in the mirror and see how far I’ve come, and I can finally say that I love myself.”