A Veggie Burger That Bleeds Like It’s Made of Meat

A Veggie Burger That Bleeds Like It’s Made of Meat 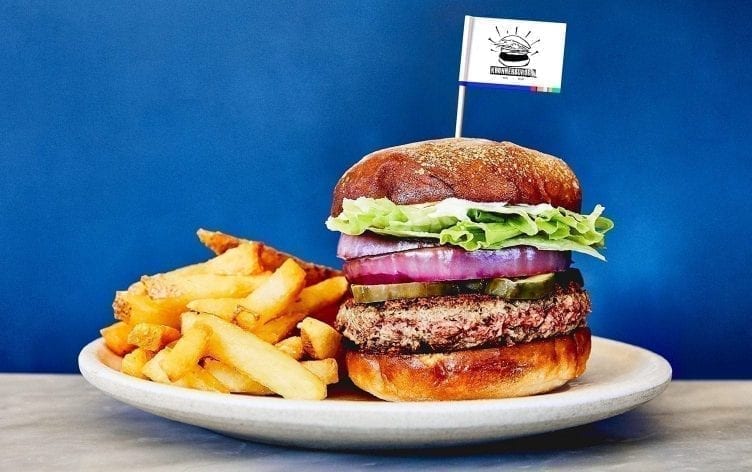 We’re chewing with deep consideration. Seated around me are six other food professionals, three other food writers, a grocery store buyer, a chef and a wine maker. Over 100 people are at the tables set with silverware and flowers, yet the room is silent as everyone concentrates on the plate in front of them. We’re focused on the taste and texture as much as a far bigger question: Can lunch save the planet?

If you believe the people at Impossible Foods, ordering one of its burgers might be the first step. Scientists have been telling us for a while that to lessen the impact we’re having on the earth, we need to stop, or at least drastically reduce, the amount of meat that we eat.

Impossible Foods, a company based in Redwood City, California, hopes to make that easier. It’s created the first burger made entirely from plants designed to look and taste like ground beef. According to the people at Impossible Foods, their burger uses 75% less water, generates about 87% fewer greenhouse gasses, and requires around 95% less land than conventional ground beef. It’s produced without hormones, antibiotics, cholesterol or artificial flavors.

Animal husbandry uses a tremendous amount of land and water, especially cattle. Not only does raising cattle require vast acres on which the animals graze, it also requires more land to grow plants for livestock consumption, which, according to the UN’s Food and Agriculture Organization, consumes 25% of the world’s fresh-water supply. Land for the cows, land to grow the grain the cows eat and water to help the grain grow: It’s all taking a toll on Mother Earth.

The man behind the Impossible Burger is Patrick O. Brown, MD, PhD. While on an 18-month sabbatical from Stanford’s biochemistry department, he switched career paths to address climate change. His focus became the global food system and how to replace meat with plant-based products that have a lower environmental footprint. He rounded up a mix of farmers, scientists, and so-called flavor experts to analyze ground beef on a scientific level with hopes of copying it with ingredients that come only from plants. In 2016, after five years of research and testing, the first product debuted: the Impossible Burger. This burger is what’s for lunch.

The main ingredients are water, textured wheat protein, coconut oil, potato protein and natural flavors. This list may be far from appetizing, but the result looks a lot like ground-up meat. There are no visible bits of rice or mushroom like fill so many veggie burgers. The secret ingredient, which Impossible Foods calls “the secret sauce” or “ the hem” (short for leghemoglobin) is a soy-based product that has the iodine-like flavor of blood and actually oozes red when the meat is squeezed. While I appreciate the effort that went into making it so meat-like, the fake-blood factor takes some getting used to.

I’m not going to tell you that the Impossible Burger tastes exactly like meat. It doesn’t. No card-carrying carnivore would be fooled. However, it can be a tasty alternative and close second place when done well. Most important, it’s vastly different from the other veggie burgers that currently fill that required spot at the bottom of most restaurant menus.

Does it taste good? Like any food, that answer totally depends on who’s cooking it. At the unveiling party for Impossible Food’s new large-scale production site in Oakland, California, three burgers cooked by three different chefs were served. The people at my table all agreed one was decidedly better than the others, but they were all good.

Impossible Foods plans to ramp up production at its new facility so it can start producing enough fake ground beef to supply 1,000 restaurants a month, up from the current 11. Want to try it for yourself? It’s available at Jardinière, Cockscomb, Kronnerburger, Public House and Vina Enoteca in the San Francisco Bay Area; Crossroads Kitchen in Los Angeles and Momofuku Nishi, PUBLIC, The Daily, Saxon + Parole and the NYU campus location of Bareburger in New York. Amy is a James Beard award-winning food writer. A former staff writer at Sunset magazine, her work has also appeared in the San Francisco Chronicle, Chow.com, Cooking Light, Tasting Table, Munchery.com and more. She’s contributed to seven cookbooks with Sunset and William’s Sonoma, and written one of her own. When she’s not writing or cooking, you can find her in a sweaty yoga class, drinking wine she can’t afford or on social media mentally correcting people’s punctuation.