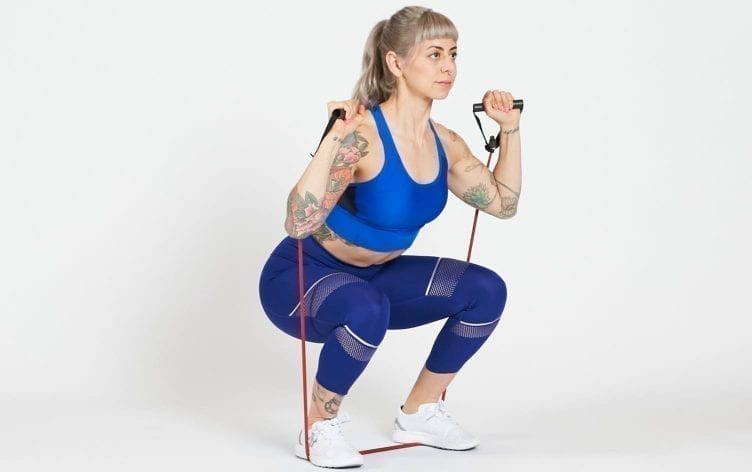 Bands give you a unique form of resistance that’s different from traditional weight training with dumbbells and barbells. Free weights use gravity as resistance, which means the weight is always pulling down toward the ground. Bands allow you to use different angles by attaching them to different surfaces. You can also use bands to recreate traditional exercises like the squat and deadlift.

Bands don’t give you a constant amount of resistance, either. They get tighter as they stretch, meaning an exercise will have different amounts of resistance at different parts of the movement. When you lift a 30-pound dumbbell, however, it’s always going to weigh 30 pounds.

If you’re unable to get to a gym, or would rather buy bands and work out at home, you can still tax your muscles and build strength. According to a 2019 research paper published in SAGE Open Medicine, band-resistance training provides strength gains similar to traditional free-weight training. As long as you use enough band-resistance, you can recreate the difficulty of a free-weight workout.

If you love the bench press and want an exercise to mimic it without using weights, you can use the band-resisted pushup. This is a strength exercise for your chest, shoulders and triceps. You can also do the exercise with your knees on the ground if it’s too difficult.

The move: Put a resistance band over your upper back. Grab one end of the resistance band with each hand. Carefully get into pushup position. Start at the top and drop down into a pushup as you normally would. Then, press yourself back up. The band stretches to give you more resistance at the top of the movement.

The deadlift is a movement where you pick a weight up off the ground, such as a barbell, and stand up with it. Then, you reverse the movement and put the weight back down. During the Romanian deadlift, you don’t lower the weight all the way to the ground between repetitions. It works your hamstrings more than a traditional deadlift.

The move: Grab a resistance band and put it on the ground, facing horizontally. Step on the middle of the band. Grab one end with each hand and stand up straight. With your hands in front of your thighs, stick your butt back and lean forward. Your hands should go down to the middle of your shin, then stand back up. Keep your back flat throughout the movement.

This exercise is meant to isolate your back muscles. You can use the band resistance to squeeze these muscles at the top of the movement, fully contracting them on each rep.

This exercise has the same set up as the band Romanian deadlift.

The move: Step on the band and grab one side with each hand. Stick your butt back and lean over so you’re at the bottom of the Romanian deadlift. Keep your body completely still but pull your elbows back as far as you can. Try to touch your hands to your ribs. Then, slowly reach your arms forward. Make sure you don’t use your back or legs to help you lift the band up; isolate the arms the entire time.

The circuit saves the best for last. This movement combines a leg exercise with a shoulder exercise. It’s tiring because it works your entire body. If you have a lighter band, you should use it for this exercise, because it needs to stretch out relatively far.

The move: Start with the band on the ground, facing horizontally. Step on the middle of the band and grab one end with each hand. Bring your hands up to your shoulders and stand tall. From there you’ll squat down as low as you can, keeping your hands near your shoulders. Then stand up and press the handles overhead until your elbows are straight and you’re standing tall. To repeat, bring your hands back down and squat again.