How To Do The Perfect Squat

chevron_left PREV: How to Begin to Meditate
chevron_right NEXT: Lemony Orzo Veggie Salad with ...

How To Do The Perfect Squat They’re sometimes referred to as the king of all exercises, and with good reason. Squats are a full body fitness staple that work the hips, glutes, quads, and hamstrings, and sneakily strengthen the core. Squats can help improve balance and coordination, as well as bone density, too. Plus, they’re totally functional. Time to banish those sloppy squats and help perfect the go-to move. 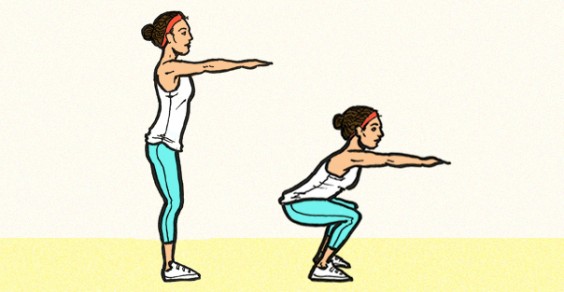 For beginners, try squats with no weight and up the lbs once proper form is nailed down. (We don’t all have to be like this guy.) When using more weight, it’s more difficult to squat deeper. But deep squats with less weight trump shallow ones with heavy weight when it comes to making us stronger. While there are many ways to squat, we dove into three of the most common weighted squats: Goblet, back, and front squats. 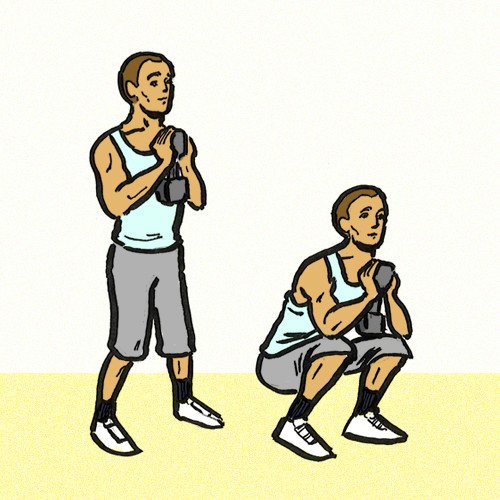 Goblet Squat
These squats do not in fact include a goblet full of wine (though we’ve found no studies disproving their effectiveness). Instead, hold a kettlebell, dumbbell, or medicine ball at the sternum (the center of the chest) while performing the squat detailed above. When performing a Goblet, drop the elbows in between the legs inside the knees, for a full range of motion. Goblet squats are great for beginners (and also experienced lifters) since they keep us from leaning forward (holding weight in front of the chest is very s stable compared to other placements). 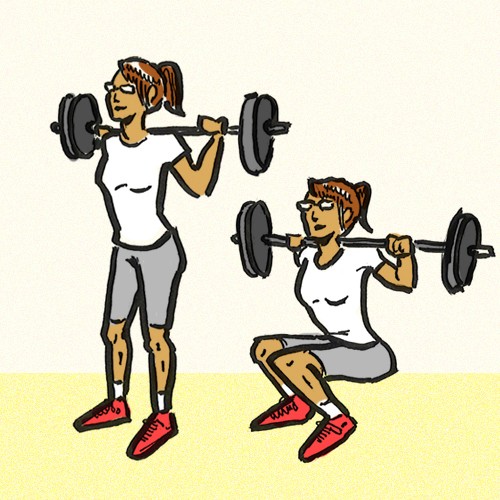 Squats can be much more difficult with a barbell, so if it’s your first time, it’s best to ask for a trainer’s guidance. For back squats, the weight rests on the back (in two positions:low or high) where it’s generally easier to squat a heavier load. The hands should be facing forward, along the same plane as the shoulders, with elbows pointing down to the ground (the arms will form a W along the bar). Make sure to keep the barbell over the center of the feet to keep the hips going back, and follow the same form for a bodyweight squat (ya know, minus holding your arms out of course!). 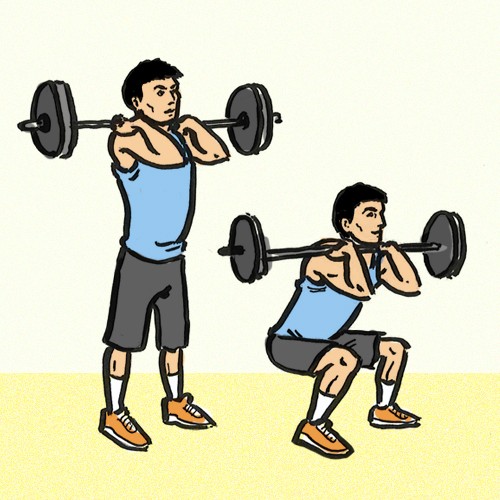 This squat is a much more advanced movement and requires placing a barbell across the collar bones (resting on the deltoid muscles). It also requires more flexibility than other versions, so it’s often best to master the bodyweight and back squats first. The elbows should point straight out (the upper half of the arm parallel with the floor) while the fingertips reach back to grip under the bar, outside of the shoulders. While it may seem unstable to hold the bar with just the fingertips, the arm positioning forms a solid shelf, so the hands mostly prevent the bar from rolling. As long as the elbows stay up, extending straight out from the shoulders, the bar will be secure. Follow the bodyweight squat instructions for the rest of the move.

THE MOST COMMON SQUAT MISTAKES (AND HOW TO FIX THEM)

The Mistake: Not dropping down low enough.

The Fix: Take a slightly wider stance, which allows the body to stay steady while it squats deeper, and engages more muscle groups. It’s easy to want to squat just low enough so the thighs are parallel with the ground, but squats can be much more effective when we drop as low as possible (the hip joint lower than the knee joint) while still maintaining good form, Greatist Expert and trainer Dan Trink says.

The Mistake: The knees drift inward.

The Fix: Turn the toes out (between 5 and 20 degrees, to get technical) to keep knees from caving inward. Knees should track in line with both the ankles and the hips, to help avoid injury and get deep in the squat. Glute bridges and lying clams will help knees from caving, says Greatist Expert Jordan Syatt.

The Mistake: The body leans too far forward.

The Fix: Put most of your weight in the heels when lowering into a squat. The weight distribution will help keep the torso upright through the squat rather than teetering forward, and help keep the hips back and down, outside of the heels. Try to spread the floor apart by driving outwards through the back/outer portion of the heel.

The Mistake: Descending too quickly. The Fix: When weight is added, moving too quickly could increase chances of injury. It’s OK to explode with power when returning to standing (so long as the body remains controlled), but sitting into the squat should be a little slower to maintain proper form.

The Mistake: Not warming up.

The Fix: Before squatting up a storm, try glute bridges to open up hips (which will allow the body to get lower in a squat). Warming up is important before taking on such a complex move. It’ll help prepare the body’s joints and muscles for movement, and might even help prevent injury once heavy lifting get underway.

What’s your favorite way to squat? Any tips we missed? Let us know in the comments below and on our Facebook page!

Illustrations by Shannon Orcutt for Greatist