chevron_left PREV: Does Strength Training Make Yo ...
chevron_right NEXT: Ask the RD: Is Intermittent Fa ... According to the Centers for Disease Control and Prevention, more than one-third of Americans aren’t regularly getting enough of it.

Although the exact details of why we sleep are still being investigated, we know it’s hard to function without it. As sleep science pioneer Allan Rechtschaffen, PhD, is often quoted as saying, “If sleep doesn’t serve some vital function, it is the biggest mistake evolution ever made.”

Insufficient sleep causes changes in more than 700 genes, one study found. Here’s how that plays out in your body. Waking up groggy isn’t the only side effect of a poor night’s sleep. Studies suggest that even one night of poor sleep causes you to think less creatively and give up more quickly when faced with a complex problem.

You also may feel more anxious or emotional. “We make judgments and decisions about our place in the world when we sleep,” says Michael Grandner, PhD, director of the Sleep and Health Research Program at the University of Arizona. “Sleep deprivation interrupts this, which can lead to anxiety, stress and depression.” Nodding off at your desk won’t score you any points with your boss, but it’s safer than nodding off behind the wheel. Six hours or less of sleep triples your risk of having a car accident, according to the National Sleep Foundation. When you’re sleep-deprived, you take “microsleeps,” where you close your eyes momentarily. The scary thing is you may not realize you fell asleep for a few seconds.

“If you feel drowsy, pull over,” says Dr. Rafael Pelayo, a sleep specialist at the Stanford Sleep Medicine Center. “You might fall asleep any moment.”

If you do stay awake, studies show that you’re more easily distracted when you get inadequate sleep, especially if you’re doing something monotonous, like driving. And your hand-eye coordination for steering isn’t as good, either. All of this adds up to dangerous commutes. Leptin naturally rises during the day and peaks at night, but that doesn’t seem to happen if you stay awake, Grandner says. In fact, in the University of Chicago study, researchers saw an 18% decrease in levels of leptin and a 28% increase in levels of ghrelin.

Another explanation for our hungry-like-the-wolf behavior may be related to changes in our brain. “We make decisions that we would not have made well-rested,” Grandner explains. “You wouldn’t normally eat a double cheeseburger for dinner, but at 1 a.m., it looks awesome and seems like a good idea.” Chronic poor sleep could put you at risk for heart problems. Sleep deprivation is associated with increased blood pressure and greater risk of hypertension.

“Sleep is when your cells regenerate,” Grandner says. “So when your sleep is disturbed, this process is thrown off. And one system that is most sensitive to this reaction is your blood vessels, because they are constantly being regenerated.”

Over time this may lead to stiffness in your arteries and less efficient healing, which can impact your heart health. After as little as a week, your body may start to look prediabetic, Grandner says, depending on how extreme your sleep deprivation is.

What he means is that your insulin sensitivity and glucose tolerance decrease, sometimes to levels seen in people with diabetes or obesity, according to a study in the Annals of Internal Medicine. In another 2016 study, researchers found that sleeping four or five hours a night may increase diabetes risk by 16%. 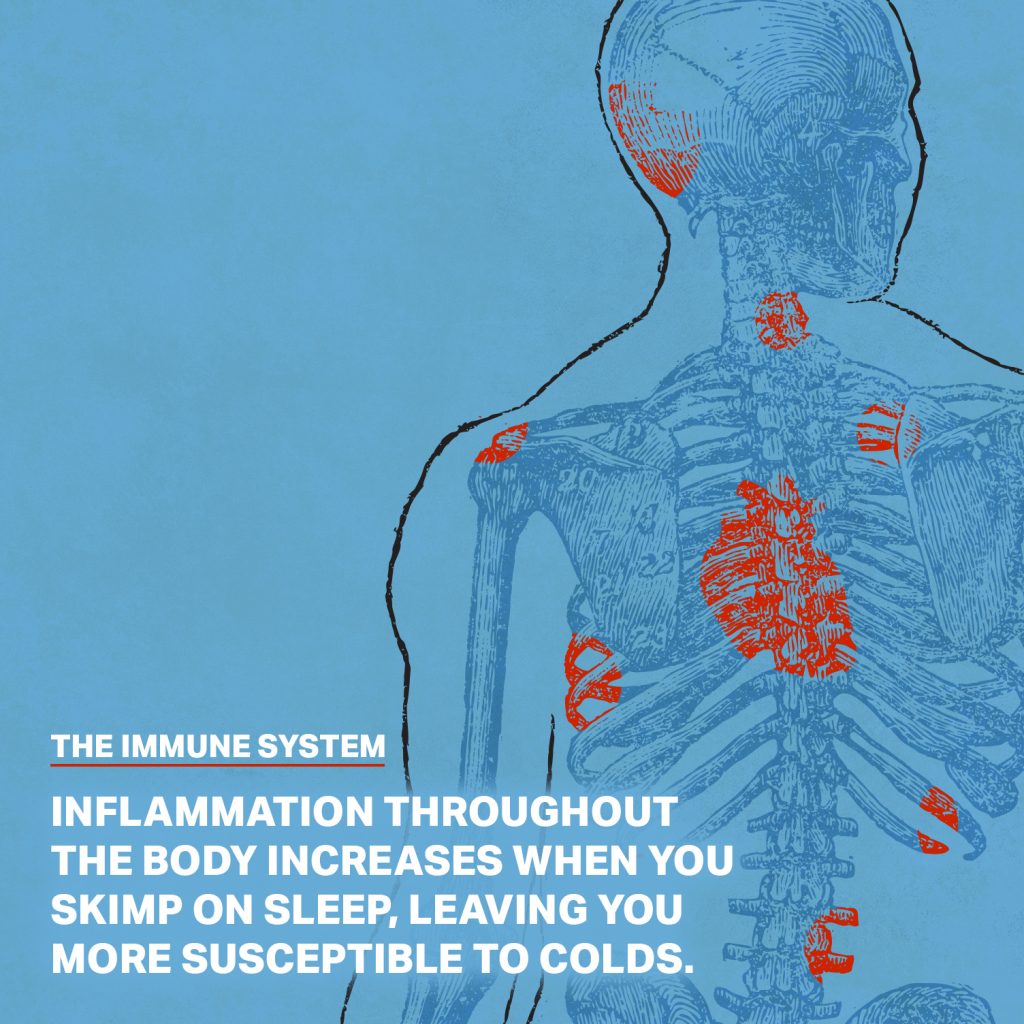 A single night of poor sleep boosts inflammation in your body. Not only could this be an underlying contributor to the increased risk of heart problems, obesity and diabetes, it could also make you more vulnerable to getting sick.