Today, there are so many teachers and styles of yoga, the odds of finding one you like are as likely as finding a pizza shop in New York. Whether you want to sweat, unwind or get in touch with your inner light, there’s a yoga class to suit you. Before you make a decision, try a few styles and a few different teachers, since each instructor has an individual focus and personality.

Here, we look at a variety of styles, from ashtanga to yin, so you know what to expect and can find the right class for you.

This physically demanding practice is made up of six strenuous sequences of poses. All classes follow a set sequence of postures with students starting in the primary series and working through each series as progress is made.

It’s helpful to start with a slower-paced style and learn the poses before you begin an ashtanga practice. You can’t flow within the sequence if you don’t know what down dog is.

What to Expect: Expect to flow rapidly from pose to pose with your breath in this physical practice.

Who it’s For: Cardio junkies; driven students who want a workout.

Insider Info: The practice was created to focus the energy of teenage boys in India.

Started by Sri Dharma Mittra in New York in the 1970s, this practice is made of up several series of flowing sequences aimed at enabling prana — life force — to flow through the spinal column and permeate all areas of the body. The practice incorporates philosophical teachings that emphasize “good health, a clear mind and kind heart.”

What to Expect: A physical practice meant to prepare the body for seated meditation.

Who it’s For: Students interested in self-realization or knowledge of the True Self.

Insider Info: Dharma Mittra created the Master Yoga Chart of 908 Postures after photographing himself in 1,300 yoga poses. You’ll find the chart in all styles of studios as a teaching and inspirational tool.

Created by Ana Forrest, this challenging practice in a room heated to 85°F uses long holds to help students go deeper into poses and intense sequences to awaken the senses. The physical practice is used to cleanse the emotional and mental clutter in the hopes students “carry a transformative experience off the mat and into daily life.”

What to Expect: To sweat and shake while holding poses as well as lots of core work.

Who it’s For: Students who want a strong physical and emotional practice.

Insider Info: Forrest established her eponymous style of yoga to cure the ails of modern society from carpal tunnel to addiction.

Hatha, one of the six original branches of yoga, is a generic term that refers to any type of yoga that teaches physical postures. It encompasses most of modern, Western yoga. Today, it tends to mean a gentle yoga class.

What to Expect: To feel more relaxed.

Who it’s For: Beginners, students dealing with or recovering from an injury and yogis looking to complement more strenuous exercise.

Insider Info: Because hatha is such a general term, students may want to ask the teacher for more information about what a specific class is like. This broad label covers most yoga classes that deviate from the Bikram — the same sequence of 26 poses practiced in 105°F room — but are still taught in a heated room.

What to Expect: To sweat.

Who it’s For: Students who want to leave a puddle on the floor.

Insider Info: Because it’s become a generic term, check with the teacher for more information about the class. Is it a flowing-style class or does it focus on longer holds?

Named for the popular Indian guru, B.K.S. Iyengar, this meticulous style emphasizes precise alignment, deep stretching and holding poses longer than in other classes. Students are encouraged to explore the mind-body connection, learn breathing techniques and focus on the spiritual as well as the physical.

What to Expect: Because of the focus on alignment, expect to use lots of props — belts, blocks and bolsters to get into the pose.

Who it’s For: Newbies, students dealing with or recovering from injuries and the detail-oriented and methodical natured.

Insider Info: Credited with popularizing yoga in the west, B.K.S. Iyengar died in 2014 at the age of 95. His devotees included Annette Bening, Aldous Huxley and Donna Karan.

Created by Sharon Gannon and David Life in the 1980s, this fast-moving, flowing style of yoga includes breathwork, chanting and philosophy in an “unapologetically spiritual” practice.

What to Expect: Expect flowing sequences, a theme for every class, chanting, spiritual references, eclectic music, breathwork and meditation.

Who it’s For: Students looking for a physically and spiritually intense practice.

Insider Info: Jivamukti focuses on the principle of ahimsa or non-harming and nonviolence, and classes often explore veganism and issues of animal rights and activism.

Kundalini refers to the energy of the root chakra, which surrounds your lower spine. Kundalini practitioners believe this energy must be stimulated to achieve self-realization, so the yoga practice concentrates on postures, breathwork, chanting and meditation to release that energy.

What to Expect: Lots of chanting, breathwork and core work around your abs and spine. It’s mainly a seated practice.

Who it’s For: Those seeking a more spiritual experience.

Restorative yoga classes use lots of props — blankets, blocks, straps and pillows — to support the body so students can settle into poses for a longer period of time. This allows the muscles to open and stretch in a more passive way.

Who it’s For: Everyone. It’s a great complement to more active classes and other forms of exercise. Restorative yoga is a great stress reliever. And the postures are simple enough for beginners and offer enough loosening that advanced practitioners can benefit as well.

Insider Info: Students have been known to fall asleep in restorative classes. This gentle style came to the United States in the late 1950s and was part of yoga’s first wave of popularity. Sivananda is based on five principles: proper exercise, breathing, relaxation, diet and meditation.

What to Expect: After breathwork, the class moves through slow-paced sun salutations, a flowing series of postures often used to warm up the body, and focuses on mastering 12basic postures.

Who it’s For: Anyone who wants to take it easy and focus on flexibility and relaxation.

Vinyasa is the Sanskrit word for flow, and, like hatha, the term has become an umbrella term for fluid-movement classes in which the poses are linked together by your inhales and exhales.

Generally, vinyasa tends to be a more vigorous style, but there’s a lot of room for interpretation and no two classes are alike. Some will be heated, others won’t be. Some will include music, some won’t. Some will focus more on breath, others will emphasize movement or meditation.

What to Expect: Continuous movement from one posture to the next.

Who it’s For: All yogis, which may be why it’s one of the most popular styles of yoga in the United States. Just find the level, teacher and studio that’s right for you.

Insider Info: Some studios call these classes flow, dynamic yoga or vinyasa. Because there is room for interpretation, the instructor’s personality comes through, so it may take a few classes to find a teacher who’s right for you.

This gentle, slow-moving practice targets the deep connective tissue through long-held poses. These more passive postures are primarily practiced on the floor for 3–5 minutes and up to 10 minutes. The goal is to increase flexibility, let go of tension in overworked joints, relax and learn the basics of meditation while in the postures.

What to Expect: To move through few postures but take longer in them.

Who it’s For: Almost anyone. It’s great for those who want a more meditative, gentle practice, and it can be complementary to dynamic (yang style) practices or high-intensity athletics.

Insider Info: The meditative stillness can be challenging for some personalities. UNCONVENTIONAL AND HYBRID STYLES OF YOGA

Down dog with your pooch? Warrior II on a paddleboard? Tree pose set to Michael Jackson? doga, SUP yoga and disco yoga are just a few of the hybrid styles of yoga that have evolved with yoga’s popularity. Here are a few unconventional types of yoga popping up:

These partner yoga classes involve using one person as a base and another using that base to “fly.” The practice blends yoga, acrobatics and performance.

Also known as aerial yoga, traditional yoga poses and acrobatics are combined and practiced in a silk hammock suspended from the ceiling.

Modifying yoga postures with a chair makes the practice accessible to those with mobility issues. These classes are commonly available at senior centers.

This blend of vinyasa yoga and freestyle dance is practiced with music by a live DJ.

You, your mat and man’s best friend, doga includes stretching for you and your furry friend.

The practice doesn’t include much asana, the physical postures. Instead, you’ll focus on breathing, simple stretches and laughing to reduce stress and release feel-good hormones.

Also known as Budokon, these classes combine martial arts and yoga. Both practices aim to release stress, discipline the mind and increase awareness so they blend together better than one might think.

Yoga in the buff promises that students will confront vulnerabilities and body issues and increase confidence and body acceptance.

Practicing on a stand-up paddleboard (SUP) started in Hawaii and has since made its way inland to lakes and rivers around the country.

This partner-style yoga involves one person moving and adjusting the other into various poses with a focus on pressure points found in traditional Chinese medicine.

Just like it sounds, Yogalates blends yoga and Pilates. 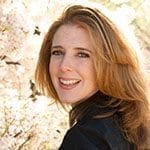 Kelly is a journalist, author, runner, yogi, skier, globetrotter and dog-lover. She has been teaching yoga since 2002 and is the owner of Past Tense, a Washington, D.C. yoga studio where her team reminds her how much fun it is to be a little twisted and encourages an upside-down approach to life. She is the author of “Gilded Lili: Lili St. Cyr and the Striptease Mystique” and “Living the Sutras: A Guide to Yoga Wisdom beyond the Mat.”