What to Know About Walking in Polluted Air, According to an MD

What to Know About Walking in Polluted Air, According to an MD The benefits of a daily walk are numerous, including improved mood, lower levels of anxiety, and a healthier heart. However, there are times when air pollution levels could negate some of these positive effects. The current wildfires in California and the Northwest, and even the increasingly poor air quality in many urban areas, might make you second guess just how safe it is to exercise outdoors. Here’s what you need to know before lacing up your sneakers.

WHY IS AIR POLLUTION DANGEROUS?

According to Dr. Josh Emdur, chief medical officer at SteadyMD, regularly exercising in times of high pollution, like what we’re seeing with the wildfires in California and the Northwest, can have negative effects similar to smoking cigarettes. “It’s unlikely a one-time exposure will have lasting effects, but there are studies that have shown an association between elevated levels of fine particulate matter and increased mortality,” says Emdur. “Your lungs are a lot like balloons, and with time, smoke and particulate matter can cause them to lose elasticity, making it harder to breathe. Ultimately, this is similar to smoking cigarettes.”

READ MORE > HOW TO WORKOUT WHEN AIR POLLUTION IS BAD

WHO IS MOST AT RISK?

When air pollution is high, anyone who exercises outdoors should understand the increased health risks, such as a higher chance of damage to the lungs, heart attacks and strokes. People who have pre-existing conditions may be more susceptible. “Long-term exposure to particulates has been linked to chronic lung diseases such as chronic obstructive pulmonary disease and emphysema,” says Emdur.

Since poor air quality can irritate the eyes, nose and throat, and cause shortness of breath, Emdur also recommends people with respiratory conditions like asthma, along with children and seniors, use more caution when walking or exercising outdoors.

“Pound for pound, children breathe more than adults and are more sensitive to pollution. Their air passages are narrower, so it takes less inflammation or irritation to obstruct the airways. Children typically spend more time outdoors and are more active, too. They can also be more likely to have asthma or other respiratory illnesses, which are aggravated by pollution.”

Similarly, seniors are more susceptible to complications because they may be more likely to have a pre-existing condition like heart or lung disease, notes Emdur. “Older adults with diabetes are also in a more sensitive population, in part because they have a higher risk of underlying cardiovascular disease,” says Emdur.

WHEN SHOULD YOU STAY INDOORS?

While there are definitely risks involved when walking outdoors during periods of high air pollution, a sedentary lifestyle negatively affects health, too. In fact, a study published in the journal Circulation shows even if you live in an area that has unhealthy air quality, regular exercise can still have positive health benefits, such as reducing the risk of developing high blood pressure.

However, this doesn’t mean you should throw caution to the wind (even if you are healthy) when pollution levels head outside of normal levels. “I recommend thinking about air quality [and possibly altering your workouts] once the Air Quality Index (AQI) is greater than 100, unless you’re particularly sensitive to pollution,” says Emdur.

During the recent fires, Emdur says he’s seen a worsening of asthma symptoms, and recommends keeping a lookout for symptoms associated with air pollution sensitivity when you do decide to head outdoors for a walk. “As a rule of thumb, consider dialing back outdoor exercise if you smell smoke in the air or if you notice a significant change in the amount of visible haze in the sky.”

During exercise, be aware of any changes in your breathing that may indicate increased sensitivity. “Many people don’t realize a cough is a common symptom of asthma,” explains Emdur. “If you notice a scratchy throat or cough following a workout, you should consider dialing back intense, sustained exertion until the air quality improves.”

DOES WALKING WITH A MASK HELP?

Walking with a mask is recommended to limit the spread of COVID-19, especially if you are around others. While some types of masks like N95s can help filter out some harmful particles, they don’t offer protection against gases in the smoke, like carbon monoxide.

HOW TO MINIMIZE HARMFUL EFFECTS

For those who would like to continue exercising outdoors when air quality might not be ideal, Dr. Emdur recommends following the AQI chart below. When you go for a walk, here are a few tips to minimize negative effects:

Make progress every day while you work on fitness and nutrition goals, like walking more steps. Go to “Plans“ in the MyFitnessPal app for daily coaching and easy-to-follow tasks to keep you motivated. 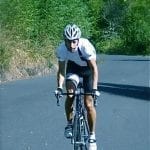 Marc is a freelance writer based in Scottsdale, Arizona. He holds a master’s degree in writing from Portland State University and is a certified physical therapy assistant. An avid cyclist and runner of over 20 years, Marc contributes to LAVA, Competitor and Phoenix Outdoor magazines. He is the former cycling editor for Active.com.