chevron_left PREV: Should You Try Stoplight Foods ...
chevron_right NEXT: Experts Debate: Should You Eat ... 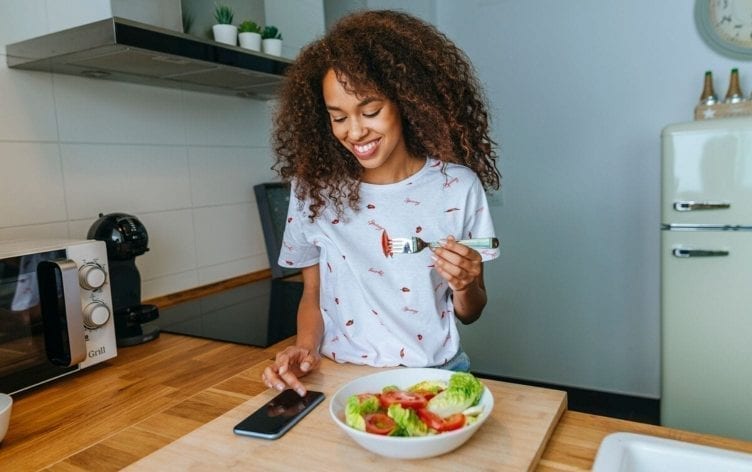 If you’re trying to lose weight, when you eat might be as important as the foods you choose.

While intermittent fasting is not new, the trend is beginning to gather more attention. As part of a 2019 study, researchers followed 19 adults with metabolic syndrome whose meals were spread over a 14-hour window and found limiting meals to a 10-hour window (followed by 14 hours of fasting) was associated with weight loss, smaller waist circumference, lower blood pressure and LDL “bad” cholesterol.

The study also showed time-restricted eating helped decrease visceral fat, the dangerous fat stored in the stomach that has been linked to increased risk of heart disease, stroke and diabetes. Although participants were not asked to change their diets, they consumed 9% fewer calories.

Eating and drinking during a 10-hour window allows your body to rest and restore for 14 hours while drinking water, coffee or tea. According to study co-author Satchin Panda, PhD, “Your body can also anticipate when you will eat, so it can prepare the body to optimize metabolism.”

Other studies on time-restricted eating have found similar results. Researchers from the University of Alabama split obese men with prediabetes into two groups: One group ate all of its meals within an 8-hour window between 7 a.m. and 3 p.m. and the other spread its meals out over 12 hours between 7 a.m. and 7 p.m. The study showed both groups maintained their weight but those who restricted their eating to an 8-hour window had lower insulin levels, reduced insulin sensitivity and lower blood pressure; their appetites decreased, too.

“The brain works together with the other organ systems to coordinate body processes such as hormone production and we manage food intake better when these systems are in line,” explains study co-author Felicia Steger, PhD, RD, a postdoctoral scholar at the University of Alabama at Birmingham. “Many Americans eat their largest meals at dinner so we are forcing the organs in our gastrointestinal system (such as our liver) to do the most amount of work as our brain is preparing to shut down for the evening to sleep. Early time-restricted feeding aims to align these rhythms.”

Steger adds that while it might only take your body a few days to adapt to time-restricted eating, your brain may need longer to accept the change because our mealtimes are based on longstanding cultural and lifestyle habits.

Although the goal for time-restricted eating and intermittent fasting is the same, longer fasts might be more difficult to maintain. In fact, research published in JAMA Internal Medicine found 40% of participants assigned to a fasting diet dropped out of the study. For those who stuck with it, fasting on alternating days was no more effective for weight loss than daily calorie restrictions.

“Intermittent fasting can provide broad health benefits and has the potential to have a huge impact on well-being, [but] we need more long-term studies in humans to really assess the utility of this approach for the prevention and treatment of disease,” she says.

Most of the current research on time-restricted eating has focused on overweight young- and middle-aged adults, leading the authors of a 2019 study published in the New England Journal of Medicine to warn the results might not be safe or replicable in other groups.

What does all of this mean if you’re trying to shed pounds? Whitney Linsenmeyer, PhD, RD, an assistant professor of nutrition at St. Louis University and spokesperson for the American Dietetic Association, advocates an old-fashioned approach.

“It’s not sexy, but balancing energy intake with physical activity is the only lasting solution,” she says.