The Walk That Saved a Life: Chris’ Weight-Loss Journey

chevron_left PREV: Why Does Everyone Keep Telling ...
chevron_right NEXT: 8 Ways to Try Cooking With Coc ...

The Walk That Saved a Life: Chris’ Weight-Loss Journey 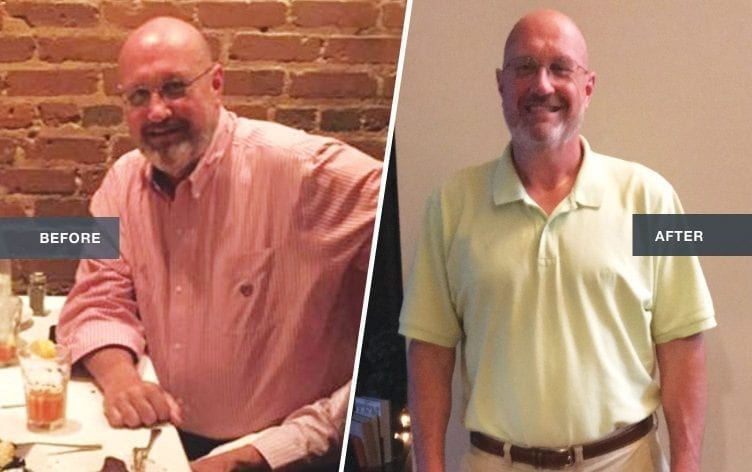 You can’t miss Chris White. A trucker based in Pendergrass, Georgia, he’s big: a 6-foot-8 frame fills up his cab. He has always been athletic, too, playing baseball and basketball in his younger days. When he was in shape, he weighed as little as 210 pounds.

But as he got older and his athletic focus shifted from playing sports to coaching them, he realized he could no longer eat practically anything he wanted. And like many people when they reach their 30s and 40s, he started to put on weight. To make matters more complicated, his health began to suffer.

In September 2015, at age 52, White was diagnosed with stage 2A colon cancer. At the time, he weighed 350 pounds. He had surgery almost immediately and, after two months of intense recovery, he began six months of chemotherapy. He had a lot of time to reflect during treatment, and he made a number of friends who’d been sidelined by various forms of cancer. It took a full three months for him to bounce back from the chemo.

One Thursday night, he looked at his wife and said simply, “Let’s go for a walk.” Call it an epiphany, call it a life-saving gut intuition, call it a desire to get his life back. It was the start of something.

“After sitting in the chemo clinic every week for six months watching great people get humbled by this awful disease,” he recounts, “I knew it was time for me to get serious when I regained my health.”

READ MORE > A TRANSFORMATION FROM OVERWEIGHT SMOKER TO BOSTON MARATHONER

So they began walking, each and every day, without fail. White downloaded MapMyRun so he and his wife could begin tracking their evening walks. It was through the promotions on that app that he soon discovered MyFitnessPal. While walking helped him feel better right away — and within weeks he began to shed pounds — tracking his food intake was never really a strategy he’d considered for weight loss. He’d tried a few diets over the years, including Atkins and other low-carb routines, with varying degrees of success. But he had never tried counting calories until he tapped into MyFitnessPal.

He knew it was good for him almost immediately, despite the great challenge of “trying to limit the quantity of food I ate every meal.”

“We pretty much all know what’s good and bad for us, but as I got more into my routine and was checking my daily nutrition levels, I found it amazing how much I didn’t know,” he explains. “It’s been an eye-opening experience to see the discrepancy between my intended targets and my actual consumption.”

White’s biggest challenge is that, as a truck driver, he travels often to small towns where healthy food isn’t a big priority. He always looks for local, family-owned restaurants where he might find some good vegetables, but sometimes it’s not possible to eat well on the road. So he has to plan ahead for that inevitability.

One thing that helps is his increased activity, including gym time with weights. He’s gained some weight due to an increase in muscle mass — “a good thing,” he reports happily.

Since White started his journey following his cancer diagnosis, he’s lost 86 pounds. But he also has Type 2 diabetes, which means he has to have extensive blood work done every four months. Since he changed his diet and began exercising, he’s brought his blood sugar levels back to within a healthier range. As of his last doctor’s visit in February, he was able to drop three medications he’d been taking, and his diabetes medication dosage has been drastically reduced.

“I started my journey for me, but all the friends I’ve lost over the last year to cancer are also my daily inspiration.”

While his path back to health began with exercise, White says the single most important part of his success has been his MyFitnessPal food diary, which he fills out daily, without fail. “You have to be accountable to yourself, or no program will work,” he says.

At the end of the day, though, it’s about finding support and leaning on others to help him through his journey, he says. As a cancer survivor, he knows he’s luckier than many who have been in his shoes.

“It was inspiring, but sad, to watch some of my friends put on a brave face while they were in the end stages of cancer,” he says. “I always tell people that I started my journey for me, but all the friends I’ve lost over the last year to cancer are also my daily inspiration.”

That’s one reason he started sharing the details of his journey on his Facebook page, which prompted many of his friends and acquaintances to ask him about MyFitnessPal. So he created a Facebook support group page called “Friends Encouraging Friends” in which, White explains, “We share each others’ journeys, helpful tips and recipes and just basically try to be accountable to each other.”

To this day, White is still paying it forward, hoping to inspire others. His success and enthusiasm for his regained health inspired even his oncologist — she’s now a MyFitnessPal user, too.