Does “That Time of The Month” Really Affect Weight Loss?

Does “That Time of The Month” Really Affect Weight Loss? 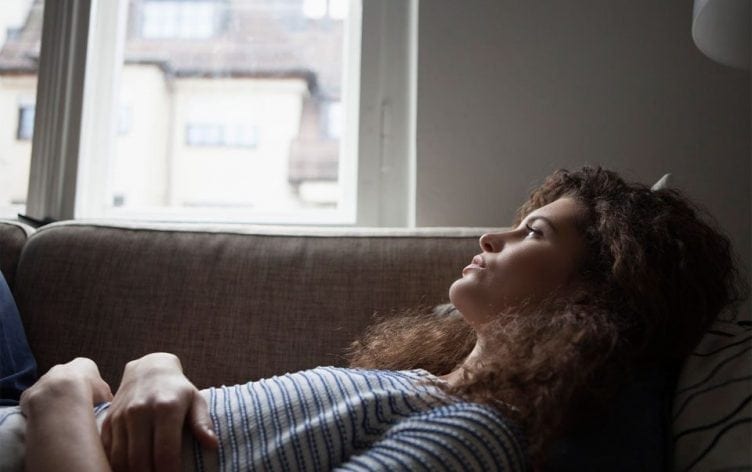 Not surprisingly, the weight-loss journey is different for everyone, but did you know that your gender can drive these differences? Women experience monthly fluctuations in hormones that  affect them physically and emotionally. If you’re a woman trying to lose weight, “that time of the month” is another layer to deal with in order to succeed.

What Is PMS, and does it really exist?

“PMS,” or premenstrual syndrome, is a unicorn phenomena used by women who need an excuse to be Cruella de Vil, right? Wrong! PMS is a diagnosable cluster of symptoms of physiological and psychological changes that, according to Drs. Steven Pray, PhD, DPh and Joshua J. Pray, PharmD, a whopping 40% of women experience!

News flash: Monthly hormonal changes and PMS are a real deal. The Diagnostic and Statistical Manual of Mental Disorders V (DSM V), also known as the psychologist’s bible, defines PMS as having five plus signs or symptoms for two consecutive menstrual cycles. Here’s a chart of some those signs and symptoms. As you can see, bloating and swelling are key contributors to what women will experience as “weight gain.”

A woman’s menstrual cycles are driven by fluctuating hormones, not all of which are implicated in PMS. At the start of your cycle, the pituitary gland releases hormones (luteinizing and follicle-stimulating hormones) to help you ovulate. During this period, an ovum (aka egg) matures and is released from your ovaries, leaving behind a group of cells known as the “corpus luteum.” The corpus luteum’s job is to produce estrogen and progesterone, which builds up a nutrient-rich blood lining to help the ovum thrive. This lining is (you guessed it!) your monthly visitor.

So, how may this cycle cause PMS?

1. Progesterone surges. The spike in progesterone right before your period is a possible reason bloating, tenderness and swelling occurs. Progesterone encourages the body to release more aldosterone, a hormone that tells your kidneys to retain water and sodium, which can partly explain your puffier appearance during that time of month. It’s normal for women to gain a few pounds of water weight. Progesterone’s role is to prepare the body for pregnancy, which generally means helping you gain weight in the form of water or otherwise.

2. Estrogen dips. Your estrogen level peaks right before ovulation, but then drastically drops and plateaus, despite the corpus luteum helping with its production. In the week before your period, the estrogen dip is a potential explanation for PMS symptoms like cravings for sweet and salty foods, irritability, depression, anxiety, nausea, etc. How? An estrogen drop-off lowers the activity of serotonin, a neurotransmitter that affects your mood and appetite. Lower serotonin activity can lead to negative emotions, which can drive us to look for reprieve in sweet and salty junk foods.

Natural changes in progesterone and estrogen work hand-in-hand to ready our bodies for childbearing; PMS is an unwanted side effect. Why women experience symptoms of PMS, and to what degree, aren’t completely understood, but hormones certainly have a hand in it. Remember that the signs and symptoms of PMS can have non-hormonal root causes. Therefore, it’s best to talk to your doctor or health provider for advice that’s tailored to your individual case.

Have you ever been on a weight-loss streak only to step on the scale and discover you’ve gained five pounds? We feel your pain. There aren’t that many tried-and-true techniques to deal with PMS, but here are a few that can help:

1. Keep calm, and exercise on.

It’s tempting to halt your exercise routine during that time of month, especially if your PMS involves cramps. However, if you are able to engage in mild, regular exercise, it can help improve your mood and energy level. Too pained to move? Try a seated meditation, focused on relaxing the muscles and regular breathing, for 15–20 minutes twice per day over the course of months. Research has shown that this can lead to a 58% improvement in PMS symptoms.

2. Experiment with changing your caffeine intake.

Try taking your caffeine intake (think: coffee and energy drinks) down a notch. Rossignol et al. found in a survey of 841 women that PMS symptoms were worse when the participants reported drinking more caffeine-containing beverages daily. Keep in mind that this is one study. Some of us actually use caffeine-containing drinks to combat PMS symptoms like fatigue and feeling bloated because caffeine is a mild diuretic (it makes you pee). There’s no solid answer here; it’s best to figure out which strategy is better for your body.

DID YOU KNOW? Midol, an over-the-counter medication for PMS, contains 60 milligrams of caffeine per dose. This is about the amount in 1 cup of coffee.

3. Reach for nutrient-rich foods if you snack.

When it comes to PMS cravings, eat outside the chocolate box. Chocolate is the go-to PMS panacea for many women, likely because its sweetness is comforting. After all, eating chocolate and treats cause the brain to release feel-good dopamine and serotonin. Instead of just reaching for chocolate, go for nutrient-rich snacks that provide calcium, vitamin D, vitamin B6 and magnesium. Some ideas include yogurt, granola, unsalted nuts, cheese and crackers, and smoked salmon on half of a bagel.

A study comparing 28 women with premenstrual dysphoric disorder (PMDD,a severe form of PMS) to women without PMDD found that those with PMDD were more likely to have a negative bias when processing non-verbal affective information (think: facial expressions). Translation? If you’re self-conscious about your weight, PMSing can negatively color your perception. You may interpret that others are making negative judgments about you. Ignore that inner voice, and don’t be so harsh on yourself.

5. Log your weight on a weekly basis. Even if you don’t experience extreme PMS, your weight may fluctuate as a result of monthly hormonal changes. If you easily gain 5–10 pounds of period weight every month, regularly tracking weight makes it easier for you to see progress. No matter what the scale says, don’t let it deflate your motivation!