The Unexpected Benefit of Being Bad at Yoga

chevron_left PREV: 8 Race Training Mistakes to Av ...
chevron_right NEXT: So You Want to Stop... Blowing ...

The Unexpected Benefit of Being Bad at Yoga 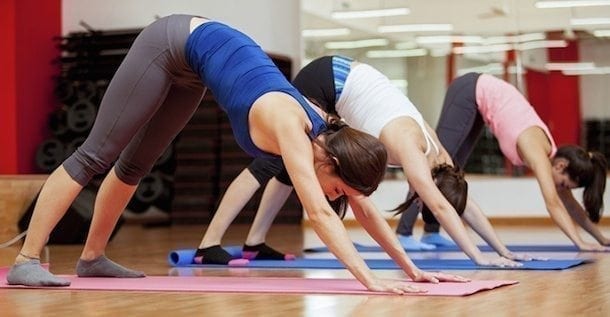 The first time I stepped foot in a hot yoga studio, it was packed. I took the only spot available, a sliver of space by the front mirror. I could barely breathe and I sweat through pores I didn’t even know I had, but when I looked up into that mirror, I saw a room full of peaceful people doing incredible things with their bodies. I was hooked. I’m an all-or-nothing sort of person and I can’t stand to be bad at things, which is to say that I set goals with the intention of achieving them and I don’t set goals I can’t achieve. So when I started going to yoga regularly, I went with the intention of becoming the person with the prettiest standing bow pose in the room. The problem was, as I realized very early on, I was terrible at yoga. I quickly became frustrated at my body. It wouldn’t bend the way I wanted it to. No matter how hard my brain tried to force it, I couldn’t hold the poses. And my standing bow was downright ugly.  This was a roadblock that I simply couldn’t accept. I was not going to spend the foreseeable future struggling with the very basic version of each pose while everyone else was two or three layers ahead of me. I had set a goal and I was going to achieve it.

I signed up for the longest, hottest class—90 minutes in 110F heat. I was simply going to try harder, challenge myself more, and push myself to be better. Yoga baptism by fire.

Within 20 minutes of that class, I’d realized my mistake. Trying harder only exacerbated how unprepared my body truly was. When the instructor lead the class in sitting deeper, I tried to sit the deepest, and I fell over. When the teacher told us we could do an optional push-up, I forced my arms to dip, and instead of lifting back up, they gave out.   As I lay there, panting and aching, I made up my mind to cancel my membership. Clearly I was never going to be good at yoga—so I’d just have to quit. Having made a plan, I instantly felt better. All I had to do was get through the rest of the class.   From that moment on, if the instructor said there were three options, I chose the easiest one. In the middle of some poses, I just collapsed on my mat to catch my breath. When the instructor demonstrated something that looked impossible, I sat it out. I was, by far, the worst yogi in the room. But I was too tired and too hot to worry about how I didn’t measure up.

After being in the heat for over an hour, the thin cotton of my clothing felt suffocating and oppressive. I had reached such a level of indifference that I pulled my shirt over my head and stood there, in my sports bra, in front of 30 people. I am a woman that takes great pains to hide her stomach at all costs, and there I was showing it for all to see and not caring one bit. That’s when I realized I had reached nirvana.   I was struggling so much that all I could focus on was the truly important stuff. And being perfect simply wasn’t important.   I walked out of that class feeling free for the first time in months. There was no tension in my back, no weight in my shoulders, and no thoughts in my head. I had finally learned how to let go.   Instead of canceling my membership, I got up the next day and went to class. I put my mat down. And when the instructor gave three options, I picked the easiest one. I skipped the optional steps. I did the least I could do. Being perfect at yoga, even being good at yoga, was simply not a goal of mine anymore. Instead, I started focusing on how my body felt, on what it was telling me. And once I listened to it, I could give myself what I needed.

I’ve been going to hot yoga for over a year now and every time I walk into the room, I remind myself that I’m not there to be good at something. I’m there to be good to myself. I show up to every class knowing I will not be giving 100 percent. I aim for 85. I do what I can comfortably do, no more, no less. This way, I find that when I leave, I am lighter than when I walked in.

Being Bad Never Felt So Good

I’d love to say that by learning to forgive myself for being bad at yoga, I’ve actually become better at yoga, that while in standing bow pose I now look like a graceful swan. But that’s simply not true. I’m still terrible at even the most basic poses. The other day, I fell over in warrior II, a pose I’ve been doing on an almost daily basis for close to a year now—I just toppled right over like a toddler. But it didn’t even occur to me to be embarrassed or upset about it. I just got back up and tried again. I might always be bad at the poses. But for the first time in my life, I feel comfortable in my own body. And I feel more comfortable with my flaws in all areas of life.   The other day I heard an instructor say, “You know your yoga is improving not when your poses get better, but when your life gets better.”   So if we’re judging by that metric, I’m happy to say I’ve achieved my goal.

Are you “bad” at yoga, too? Share you experience in the comments below!