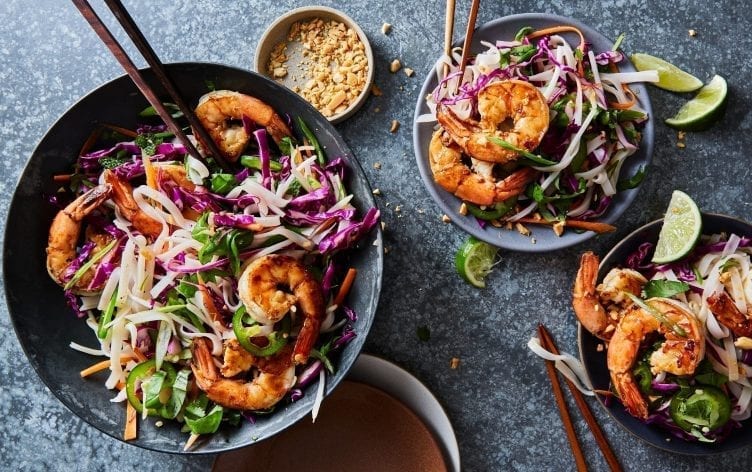 Think of this hearty dinner salad as a lightened up, chilled version of your take-out favorite. We’ve upped the veggies for a crunchier, brighter, healthier dish and swapped the sugary sauce for a punchy dressing made with sweet-and-sour tamarind paste — pad thai’s starring ingredient. You can find tamarind paste in the Asian food aisle at your local grocery store. If you are in a pinch, omit the tamarind paste and up the lime juice and brown sugar to two tablespoons (instead of one).

In a separate medium bowl, toss the shrimp with half of the tamarind dressing. Let sit while you prepare the remaining ingredients.

In a large pot of salted boiling water, cook the rice noodles according to package instructions. Drain well and rinse with cold water. Transfer to a large bowl and toss with 1 tablespoon oil. Add the cabbage, bean sprouts, carrot, scallion and Fresno pepper to the bowl with the noodles and gently toss to combine.

Drain the shrimp. In a large nonstick skillet, heat the remaining 1 tablespoon oil until shimmering. Cook the shrimp over moderately high heat, turning once, until just cooked through, 1–2 minutes per side. Transfer to a plate.

Toss the noodles and vegetables with the remaining dressing. Fold in the mixed herbs and season with salt. Divide the pad thai salad between four shallow bowls and top with the shrimp. Garnish with crushed peanuts and serve with lime wedges.

*NOTE: Since half of the dressing is discarded after marinating the shrimp, only half of the ingredients are factored into the below nutrition facts.