Living Healthy-ish and What It Means for You

chevron_left PREV: The Window of Opportunity for ...
chevron_right NEXT: 8 Tips for Making a Healthier ...

Living Healthy-ish and What It Means for You In the past year or so, a new health trend has hit the scene: healthy-ish.

Think of it as being healthy within reason. Despite being a less than intuitive term, healthy-ish was coined by Michael Pollan and has been covered in a PBS documentary titled “In Defense of Food, based on Pollan’s book of the same name, as well an article in The Atlantic. It’s also been snapped up by Bon Appetit, a media outlet known for decadent, gourmet fare, that’s adding its take on eating a balanced diet. But what does it actually mean, to eat “healthy-ish?”

According to Mindy Kurzer, a nutrition scientist, professor and director of Healthy Foods and Healthy Lives at the University of Minnesota, it’s actually not as complicated as it might seem. “The healthy-ish idea is actually consistent with what many nutritionists have said forever,” Kurzer says. What this means is “there’s no such thing as a ‘good’ food or a ‘bad’ food. The important thing to focus on is the dietary pattern overall.”

To Kurzer, healthy-ish is a health and wellness philosophy emphasizing a long-term approach rather than a set of harsh restrictions. When following a healthy-ish philosophy, “the thing to focus on is your diet over the course of a week,” says Kurzer. “Hopefully it’s good and healthy, but that doesn’t mean you can’t occasionally splurge on the treats you like. Foods that are high in fat and high in sugar aren’t necessarily bad, you just shouldn’t consume a lot of them.”

Because actually creating lasting changes can be tricky, Kurzer offers five tips to integrate the healthy-ish philosophy into your lifestyle:

Kurzer is a proponent of getting clear about why you’re interested in the healthy-ish approach and what you hope to get out of it. “Each person needs to figure out what their goals are because each person has different goals. For some it might be to lose weight, for others it might just be to get fit in general — and it might involve speaking to a nutritionist or a personal trainer to figure them out.”

The next step is to figure out where you need to make lifestyle changes to achieve your goals. Again, Kurzer emphasizes individuality: “No one program is going to work for everyone. Vegans and vegetarians, for example, already have a set of restrictions that they need to work within. It also depends on what makes you feel best — some people feel better when they eat a lot of meat and others don’t. Figure out what you can do in your specific life to reach your goals.

Once you’ve sorted out the areas and practices where you can make modifications, it’s important to focus on sustainability first. “Figure out a program that will incorporate what you naturally like and that avoids what you don’t like,” says Kurzer. “It has to be reasonable for you because this is intended to become a lifelong plan.”

> How to Manage All That Free Food at the Office
> Is It OK To Eat My Kryptonite Food?
> Stressing Your Resolution? Here’s Why You’re on the Right Track

“It’s a bit of a cliche,” Kurzer confesses, “but just take it one day at a time. Allow for slip ups and don’t beat yourself up over them. If you have a bad day, just wake up the next morning and note that yesterday wasn’t great, but decide that today will be a good day. Allow for imperfection — it’s the shame of messing up that really derails people.”

“You have to figure out what your barriers to success are. What are your food triggers? Is it going to parties? For me it’s traveling. I travel a lot for my work and it’s difficult for me to eat and exercise the way I want to. I try to kind of allow it and do the best I can and, once I’m home, I can go back [to my regular routine].” Kurzer says, adding, “when it comes to gateway foods, as my trainer calls them — those foods that once you start, you just can’t stop — it’s probably best to try to avoid them altogether rather than tempt yourself with just a bit, and things like that.” 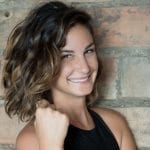