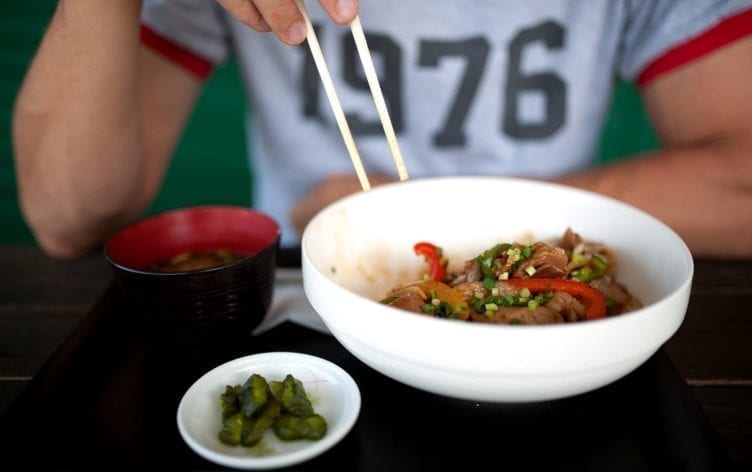 You’ve likely noticed the scent of fresh-baked pizza or a warm cinnamon bun is intoxicating on your way into a food court, but after you’ve eaten a well-balanced lunch, it’s significantly less appealing. That’s because your sense of smell is strongest when you’re hungriest. And it’s not the only sense that affects your appetite.

Here, a look at how the sensory system influences food choices, portion sizes and satiety:

If you don’t see what you’re eating, you may eat less and still feel satisfied: Swedish researchers found sighted people ate 22% less food while blindfolded, yet they felt just as full as when they ate without blindfolds. This may be because when you can’t see what you’re eating, you miss visual cues which may make you salivate and stimulate your appetite. This is an important reminder to eat more mindfully, gauging how full you feel internally, rather than continuing to eat because there’s more food in front of you.

Too much of a good thing may make you inclined to eat less: French researchers found when the appetizer course and the dessert course at a single meal have the same aroma, people are inclined to eat less of the dessert since they’re already satiated by the same aroma from earlier in the meal. To replicate this in your own life, try eating different courses with the same scent (such as citrus, anise or mint); you may feel full at dessert sooner than you expected.

What’s more, when you can’t smell, it diminishes your sense of taste. If you find the food bland, it can be easy to overdo it on sodium or other dressings. Keep this in mind the next time you find yourself stuffed.

If you’re tracking your intake to help with weight loss, consider dining in silence, rather than listening to music. Researchers at Georgia State University found people consume more fat and calories during restaurant meals when there’s music playing.

The type of music may even have an influence over what you eat: Researchers at the University of Arkansas found when people listened to music designed to evoke emotions, like jazz, they were more likely to rate emotional foods, like chocolate, as more pleasant-tasting. If you’re prone to emotional eating, it’s a good idea to pay attention to background music or leave it off if you’re at home.

Even if you love potato chips, you can train yourself to enjoy eating better-for-you foods by cutting back on processed ones. That’s because highly-processed foods often contain additives like sugar and sodium, which make foods extra sweet and salty, and keep you craving more of the same. Reaching for whole foods more regularly can help train your tastebuds to crave healthier options instead.

The way you perceive a food’s texture in your mouth (known as its “mouthfeel”) may dictate how much or how little of it you’ll eat. As a general rule, the longer it takes to chew or swallow something, the less of it you’ll eat. Researchers in New Zealand found that among people who were offered foods with low-, medium- and high-textural complexity, those who consumed food with the highest textural complexity ate less overall, yet they felt just as full as everyone else. For example, try a whole apple instead of applesauce or a handful of almonds instead of almond butter.

Each of the five senses plays an important role when it comes to keeping appetite in check. Try focusing on enjoying meals sitting down with minimal distractions. Opt for whole foods when possible and try to incorporate multiple textures to aid satiety. Ultimately, practicing mindful eating can help fuel weight loss and promote healthy nutrition habits.