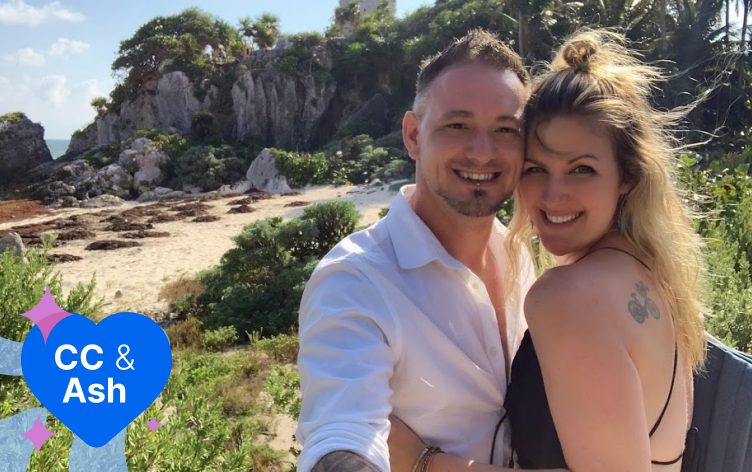 A few years ago, CC Thompson was making some big life changes. She was recently divorced, on her way to losing 50 pounds, and ready to take on a new challenge: running a half-marathon for the first time.

CC started training for the Detroit International Half-Marathon and quickly realized that while her friends and family supported her goal, they didn’t necessarily want to go the extra mile with their encouragement. “When you post your race times on social media, people get a little sick of it,” she says.

She realized she needed to find like-minded people who were also passionate about fitness, running and healthy living to get the support and accountability she craved, so she joined MyFitnessPal. What she didn’t know (yet) was that not only would she find a group of people she’d come to think of as her personal cheerleaders, she would also find one particular like-minded person who would change her life forever.

As CC began logging her food with the app, she discovered it was about so much more than counting calories. “Knowing what’s in your food and what you’re putting in your body gives you a better understanding,” she says. “During my training, I had days where I felt exhausted by 6 p.m. and couldn’t figure out why. My MFP friends looked into my diary and pointed out I wasn’t getting enough calories or protein for the daily distances I was going and that I also needed weight training to vary it up. I wouldn’t have known that without tracking and without opening my diary to others.”

WHAT’S NOT TO LOVE? (OTHER THAN MELTED CHOCOLATE)

As CC opened up to the community, she wanted to get to know her new friends better, so she posted an ice-breaker question asking people to share a random fact about themselves. There were stories of broken bones and silly talents, but one response really caught her attention. It was from a guy named Ash, who confessed he had a fear of melted chocolate. If you want to stick out in a crowd of people with ambitious health goals, all you need to do is be the guy genuinely frightened of everyone’s favorite sweet treat!

CC and Ash had mutual friends in the community, so when he reached out and explained he was an artist who had sketched community members and wondered if he could draw her, she was intrigued. But also wary. “I was always like: This is not a dating site. No one is coming here to hook up.” But even though Ash prefaced his question with “I don’t want you to think this is weird or creepy,” CC wasn’t convinced it wasn’t a pick-up line. Luckily, Ash quickly assuaged her concerns by sending a link to the other portraits of people he’d drawn and, then, feeling flattered by the request, she agreed.

The portrait request led to more conversations and CC and Ash quickly formed a friendship over their shared interests and mutual support of each other’s health and fitness journeys. So it only made sense that when CC, following through on a post-divorce promise to herself to travel more, booked a trip to London, Ash, who lived nearby, offered to play tour guide. “We spent the weekend doing touristy things, and when I left, I already knew we needed to go on another trip.” (Which they did.)

CC JOINED MYFTINESSPAL FOR SUPPORT AND FOUND A CHEERLEADER FOR LIFE

When the couple wasn’t exploring Mexico, Iceland, Italy, and their respective hometowns, CC and Ash stayed in constant communication. That communication was especially meaningful to CC when it came time to run the Detroit International Half- Marathon. Ash was in England, but he still managed to be her biggest cheerleader.

“I was wearing a fanny pack, and I could feel my phone buzzing a lot. I didn’t want to take it out and interrupt my stride, but I knew he was sending me ‘Way to go!’ and ‘You’ve got this!’ messages, and that’s what kept me going. I couldn’t wait to get to the end to see what he’d texted me.”

When CC crossed the finish line, it was even better than anticipated. She opened up her phone not only to heaps of encouragement but to photos of Ash cheering her on while wearing a Michigan hoodie.

LIVING AND LOVING WITHOUT LIMITS

While Ash was inspired and enthusiastic about CC’s health and fitness journey, the feeling was mutual. “He had a really horrific accident when he was 9 years old and his left leg was amputated. We’re always doing physical things when we’re together, but he doesn’t like any special treatment. When we were in Italy, we were always going on hikes, constantly moving, and the fact that he does what everyone else does without even blinking … it’s awesome.”

There was more to that 2019 Italy trip than just hiking. On CC’s birthday, Ash pulled out a ring and proposed. (Spoiler alert: There will not be any chocolate fountains at the wedding.) “He is so amazingly supportive of the challenges I set out for myself. And I try to be the same for him. Whether it’s hiking up the 382 steps of the start of the Cinque Terre trail in Italy, walking for hours through London, or finding a prosthetic leg so he can start running with me, being with Ash has been the adventure of a lifetime.”

Oh, and about that drawing Ash did of CC? He never did post it online. “It was my running joke that it really was just a pickup line, and it didn’t really exist,” CC laughs. “But he framed it and gave it to me for Christmas.”

Turns out he just really wanted to give it to her in person. And come this spring, Ash will have someone brand new to draw when he and CC welcome a new baby boy into the world. 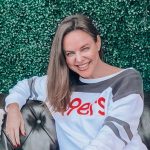 Daisy Barringer is a San Francisco-based freelancer who writes about lifestyle, travel, food, wine, and anything and everything that makes life fun. When she’s not rooting for the 49ers or snowboarding in Tahoe, you can find her hanging out in SF with 155-pound Saint Bernard, Monkey. Find her (and cute pics of her dog) on Twitter and Instagram.