How Focusing on Nutrition Helped Kristin Grow Her Family

chevron_left PREV: Why You Should Ditch Disposabl ...
chevron_right NEXT: From Keto to Whole30: A Sports ...

How Focusing on Nutrition Helped Kristin Grow Her Family Before struggling with infertility, Kristin Flora, a 31-year-old insurance agent from Indiana, had a passive relationship with her health. “A lot of it was genuinely just a lack of education. I was doing all the things that I thought were good without the real education to know the difference,” she says, explaining that in college she used to guzzle sugary sports drinks because she assumed they were a healthy choice. “They claim it restores your electrolytes and blah, blah, blah — I was thinking that I was doing a good thing for my body, but in reality, I was just pumping it full of sugar.”

Despite some iffy eating habits, Flora stayed active and wasn’t really worried about her weight. “I was probably only about 15 pounds over what I ideally needed to be,” she says. “But I was not in a place where I really knew my body or knew how to make it work at its optimum efficiency.”

Later in adulthood, Flora and her husband realized they were having trouble getting pregnant. Having a passive relationship with her health was no longer an option.

“My body wasn’t healthy from the inside out,” she explains. “Doctor after doctor pumped me full of all these hormones; more than one of them said I would never have kids. At that point, I was pretty frustrated. All these doctors kept saying, ‘try this drug or that hormone,’ but I realized I wanted to get pregnant as a result of my body operating well — not because I forced it into being fertile because of a drug.” So she and her husband started researching, asking what they could each do to be in prime health and increase their chances of starting a family — and as a gift to their future kids.

Research about how to optimize her health brought Flora back to her roots. As the daughter of hog farmers in north-central Indiana, she had grown up with a fundamental understanding of nutrition that had somehow gotten lost in her adult life. “[Growing up,] we would put all of these vitamins and minerals into the feed mix for the animals,” she says. She even remembers taking care of the soil to make sure that it was well-nourished — all parts of a healthy, functioning ecosystem. That’s when she realized she hadn’t been showing the same care to her body. “It made me look more at the core of my nutrition,” Flora says. “We adopted the mindset that everything you eat is either fighting disease or helping disease — it’s either making you more healthy or less healthy.”

Seeing food in this new way, Flora wanted to do more than just make top-level changes like cutting out soda and eating more greens (though she did both) to maybe lose a few pounds. She downloaded MyFitnessPal to start tracking her meals, paying specific attention to the micro- and macronutrients she was getting. She jumped into tracking everything she ate and drank, hooked on the insights she was getting about her nutrition. 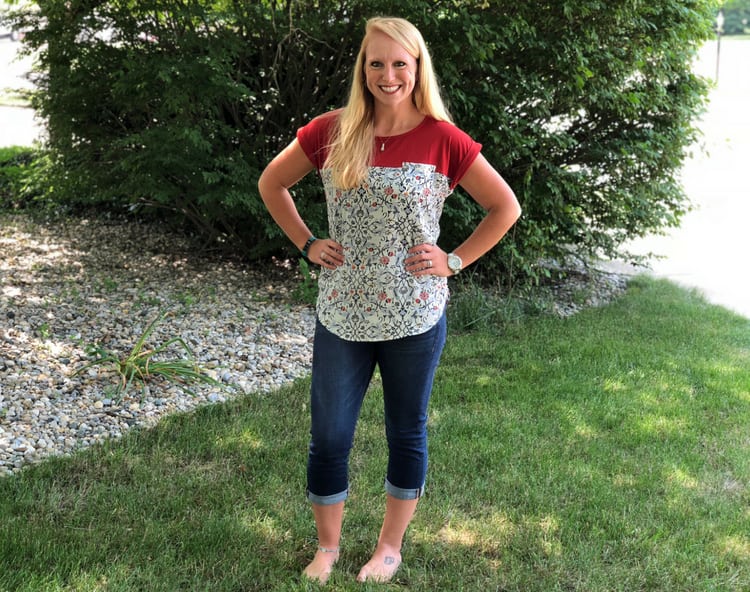 “MyFitnessPal helped educate me about what I was putting in my body,” she says. “I can enter foods and the app will spit out helpful information like how much protein I’ve eaten toward my protein goal — it will make little comparisons and pie charts to tell me when I am on track.” Even her husband got hooked on the health insights, learning to make sure his “healthy” choices were actually helping him reach his health goals. “MyFitnessPal breaks down his different juices in terms of carbs and sugars,” Flora explains. “We’re finding out that even when you’re juicing carrots and all that good stuff, you might be consuming more carbs and sugars than you want to be.”

Paying closer attention to how changes in her nutrition changed the way she felt didn’t just change Flora’s relationship with food, it also changed her relationship with her overall health. “If I drink a diet Coke, it’s not even a treat anymore, because I know that it’s just going to give me a headache and make me feel sluggish and grumpy for the next three hours,” she admits. “It really does affect you. It affects your productivity and your level of happiness. It affects your whole life.”

BECOMING AN EXPERT ON HER HEALTH

Not long after she started taking an active role in her health and focusing on her nutrition, Flora became pregnant with a healthy baby boy. She’s stuck with MyFitnessPal every single day for three years “all the way up and back down through two more pregnancies,” she shares. “My biggest pet peeve is when people say, ‘Oh, you’re so lucky that you bounced back from a baby,’ when there are literally thousands of hours that have gone into this body — what I put into it, how I feed it and how I take care of it.”

For even more good news, Flora recently learned she and her husband are expecting their fourth child.

“What I’m most proud of from all of this is being able to pass [nutrition knowledge] to our three, soon to be four, children,” she says. “Hearing our 4-year-old say ‘Mommy, this isn’t healthy,’ or recognize that if they eat too much sugar they’ll get a tummy ache is amazing.” Just as they had set out to do while struggling with infertility, Flora and her husband are actively passing on the gift of better health to their kids. “We’ve done some experiments with our 2-year-old daughter: We’ll put a bowl of spinach in front of her next to a slice of pizza, and she will — even being an independent 2-year-old — push away the pizza and eat the spinach,” Flora laughs.

If it wasn’t clear before, baby number four 4 made Flora appreciate just how well she knows her body — a far cry from the passive approach to health she was once used to. “I think I knew 24 hours after the baby was conceived that I was pregnant because I know how my body functions that well,” she laughs. “I’m proud to understand my body.”