chevron_left PREV: Slow Cooker Chicken & Wild Ric ...
chevron_right NEXT: What to Do If You Don’t Have ... I’ve been addicted to something, it seems, my entire adult life. It started with alcohol in early adulthood and progressed from there. To my credit, I was great at moving past addictions. Unfortunately, I did that by replacing them with other addictions. At some point, my addiction became eating. At the time I found myself switching to this addiction it seemed like the least dangerous of them all.

An athlete in my youth, I could feel the physical abilities I once had diminishing as I gained weight. How much weight? I had a scale that went to 375 pounds, and I maxed it out. Easily. I was ashamed of what I had become. I worked from home, which allowed me to become increasingly reclusive, which then became almost a necessity as limited mobility led to further embarrassment.

I was so ashamed that I went out of my way to not be photographed. Nonetheless, someone snapped a shot of me on my 45th birthday. It turned out to be the best thing that ever happened to me.

Something had to change and I had to figure out how to make it happen. I wasn’t sure how to start, but I knew this: It had to be sustainable. I also decided daily exercise — or at least activity of some sort — had to be part of the plan.

Mostly though, realizing it had taken 15–20 years for me to reach this point, I knew success would need a long-term outlook. I wasn’t going to fix myself overnight.

I had tried a number of fad diets — mostly of the “eat all the (insert food you can’t actually eat all of without gaining weight) you want and still lose weight” variety, with the obvious results. So instead of “going on a diet,” I decided I just needed to “have a diet.”

The first step in that direction was keeping track of what I was eating.

I did some studying and came up with a 2,000-calorie daily target. I bought a food scale and began keeping a written journal of what I ate (something that would prove to be invaluable — especially when taken to the next level).

I also began exercising daily. I went to my apartment complex exercise room and walked on a treadmill. My goal was an hour of exercise a day. In the beginning, I was able to do 10 minutes of brisk walking, but I remained in that room for the hour I had set aside for exercise. The idea was creating and committing to the time in my schedule, even if I was unable to go that long at first (another decision that would prove to be wise).

The overriding premise on both the diet and exercise was they were non-negotiable. They had to be part of my daily life.

I also needed a goal; something to work toward that was realistic but not overly ambitious.

I picked an arbitrary number for the goal: I wanted to be under 200 pounds. I decided five years should be enough to get there (it wasn’t, but more on that to come).

In hindsight, setting reasonable goals and being resolute in the process were the keys to my ultimate success.

I made immediate and positive progress, but they were followed by ups and downs. The early victories on the scale were often followed by disappointments. I was certain my exercise/activity level was enough (it was increasing), so the diet had to be the issue.

And in 2012, a year beyond the initial date I set, I was still far from my goal

In April 2013, somebody asked if I’d heard of MyFitnessPal. I hadn’t, but it turned out to be exactly what I was looking for.

My written journals were detailed in terms of what and how much I was eating. But as I researched further, it became clear there was more to it than calories in versus calories out, one of the many insights I gained through MyFitnessPal.

I began joining challenge groups that required adherence to specific ratios of macronutrients. As I learned, MyFitnessPal offered that information along with other helpful data about the foods I was eating. The difference and the change that resulted from that new knowledge was notable.

I finally hit my goal in November 2014 — three years later than I hoped. But I hit it nonetheless.

For me, being willing to understand that this is a life-long process was huge.

The only bigger factor has been tracking. Beyond the accountability that comes from knowing what I am putting into my body, gaining an understanding of how various changes and adjustments affect my progress has been an invaluable tool as I continue to move forward and experiment with variations in the process.

As I review the last 13 years, and the lessons learned from my mistakes and successes, there are a number of things that made a difference in my journey, including consistency, persistence, patience and the ability to understand setbacks and move past them. It’s also crucial to be open to using the tools at your command to learn more about nutrition and exercise and their impact on reaching your goals.

Once you decide, nothing can stop you but you. 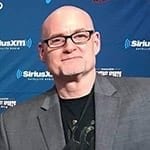 Bob Harris is a writer, editor and radio host who relies on nutrition and exercise to remain productive, semi-relevant and (ideally) to live forever (he’s willing to accept two out of three).