Belly, Hips, Thighs: Where Your Body Fat Is Matters

chevron_left PREV: The Health Benefits of Walking ...
chevron_right NEXT: 13 Ways to Use Brussels Sprout ...

Belly, Hips, Thighs: Where Your Body Fat Is Matters

Aiming to lose body fat is a common priority for improving your overall health and why you set a goal to consistently track your food intake and make more time for movement. However, as we learn more about the human body, it’s becoming clear the relationship between body fat and health is a little more complicated — and we’re learning where your body fat is matters.

For instance, it’s possible to have a BMI, or body mass index, in the “overweight” or even “obese” range and still be healthy. This is partially because BMI doesn’t account for body composition, or your relative levels of body fat, muscle tissue, bone and water. People with higher proportions of muscle tissue (Think: Olympic weightlifters), are likely to be heavier. But BMI and body fat measures also don’t account for something else that’s proving important: location and type of body fat.

Put simply, not all body fat is created equal, and not everyone with more body fat has a higher risk of health conditions that are usually associated with being overweight or obese. Here, experts explain why body fat type and location may matter more than the overall number on the scale. 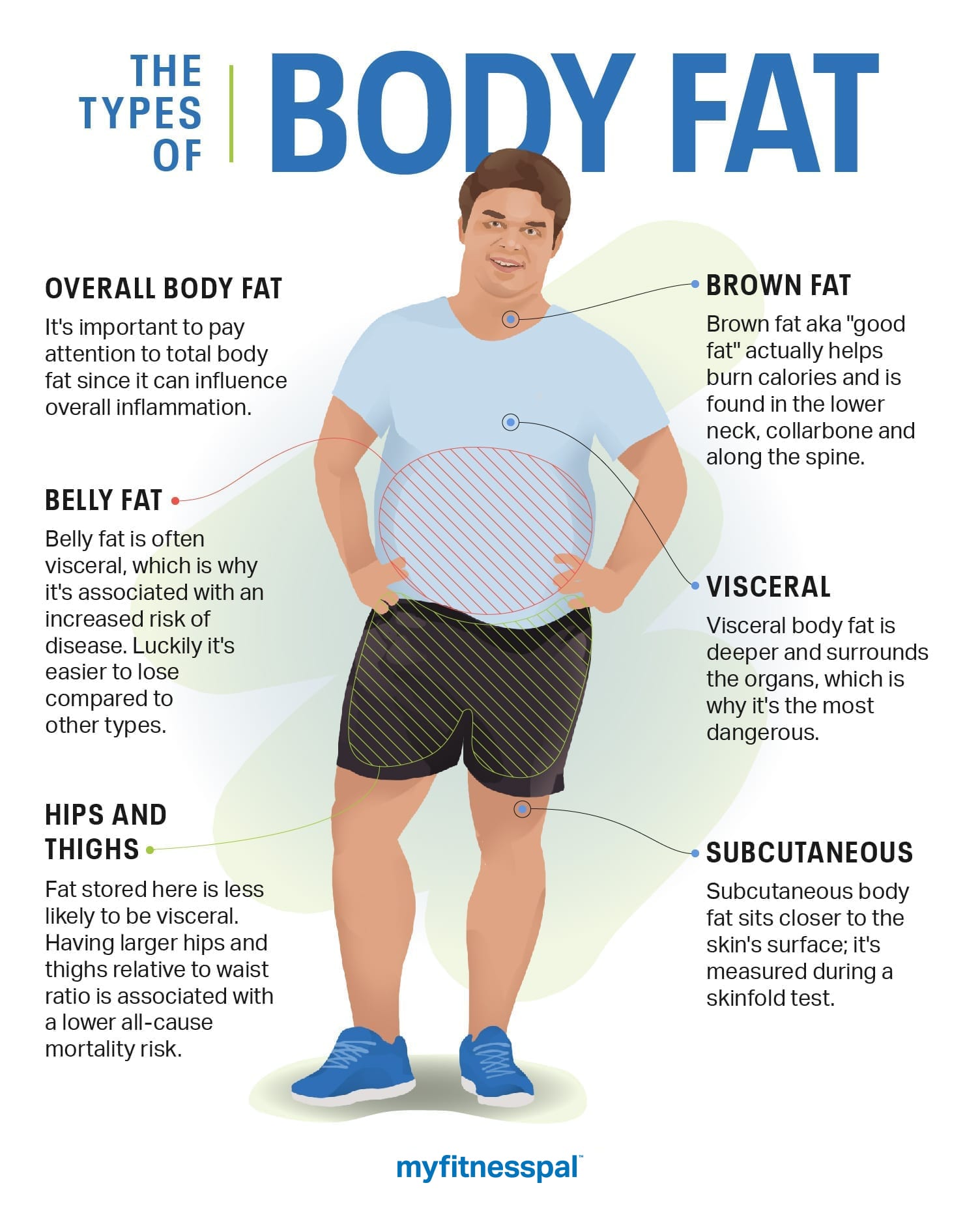 “We used to think of body fat as inactive tissue, meaning it didn’t really have an active function in the body,” says Ryan Andrews, RD, principal nutritionist and advisor at Precision Nutrition. “Now, it’s known as a hormone factory that can influence other health conditions and parts of the body.”

There are three different types of body fat:

WHERE YOUR BODY FAT IS LOCATED AND WHAT IT MEANS

“How we live can influence how much body fat we have, along with where we store it,” explains Andrews.” But the body fat we have and where we have it can also influence how we live; it’s a reciprocal relationship.” Where your body fat is located depends on a range of factors including genetics, diet, stress levels, how much movement and sleep you get, as well as things like the health of your mother when in utero and any social or economic inequalities you might face, says Andrews.

Here’s a breakdown of the body fat locations most often looked at in research, and what we know about them.

“Gaining weight primarily in the belly is associated with increased risk of heart disease, diabetes, high blood pressure and high cholesterol,” notes Dr. Nicole Harkin, a cardiologist. “I am typically much more interested in a patient’s body composition or waist circumference than BMI, because we know belly weight is a better determinant of cardiovascular risk.”

While you can’t spot-reduce fat from an area of your body, including your belly, the good news is visceral belly fat may be easier to lose through lifestyle changes (like the ones suggested below) compared to other types of fat.

In fact, having larger hips and thighs relative to waist ratio was associated with a lower all-cause mortality risk, which may mean that having more body fat in these areas isn’t necessarily bad for your health. This may be due to two factors: Visceral fat isn’t found in these areas, and both measurements also include muscle — and having more muscle tissue is generally considered good for your health.

Total body fat is also an important measure, but the ideal amount for health isn’t as cut-and-dry as you might think. “When it comes to overall body fat levels, each person has a different range where they tend to feel best and that’s sustainable for them to maintain,” says Andrews.

Still, keeping total body fat in check is important because it can influence overall inflammation, Andrews notes. Chronic inflammation can attack healthy tissue and lead to problems like a weakened immune system, heart disease and cancer.

HOW TO MAINTAIN A HEALTHY LEVEL OF BODY FAT

If you’re wondering how to land yourself in your personally comfortable body fat range, there’s a lot you can do, experts say.