9 Unexpected Ways to Use Greek Yogurt

9 Unexpected Ways to Use Greek Yogurt By now, you and everyone you know has probably eaten a fair share of trendy superfood Greek yogurt, likely in some pretty traditional ways. Not that there’s anything wrong with that. The low-calorie, high-protein ingredient tastes great in classics like smoothies and parfaits, and there’s no denying that.

But those aren’t the only things it’s good for. There are many exciting ways to use this kitchen staple to up the healthy ante on all of your favorite meals—both sweet and savory! Use these nine tricks to give every recipe a bit of extra protein and a subtle Mediterranean flare.

1. SWAP IT INTO ALL THE RECIPES WHERE YOU WOULD NORMALLY USE SOUR CREAM

If you’re obsessed with that sour cream onion dip that’s always at parties (because, like, who isn’t?), but want a lower-calorie option, consider using Greek yogurt instead. In fact, anywhere you might use sour cream (on tacos and salads), you can easily cut down on calories by subbing it in for sour cream.

2. USE IT INSTEAD OF MAYO IN CHICKEN OR TUNA SALAD AND DEVILED EGGS Abbey Sharp, dietitian and blogger at Abbey’s Kitchen, tells SELF that she likes to replace half the mayo in chicken or tuna salad to boost protein. You can even go as far as removing it entirely as Gimme Some Oven does in this lightened-up chicken salad sandwich recipe. Even try swapping it into deviled eggs if you feel like getting fancy.

3. MIX IT UP INTO A LOW-CAL RANCH DRESSING

Classic ranch typically combines about a cup of buttermilk and 1/4 cup mayonnaise. This recipe from Show Me The Yummy adds Greek yogurt while completely nixing the mayo and reducing the amount of buttermilk to just 1/3 cup. The whole recipe (which makes 1 1/2 cups) is only 206 calories total, while a 2-tablespoon serving of that classic ranch has about 140 calories.

4. MIX IT WITH OATS TO MAKE A MUESLI PARFAIT 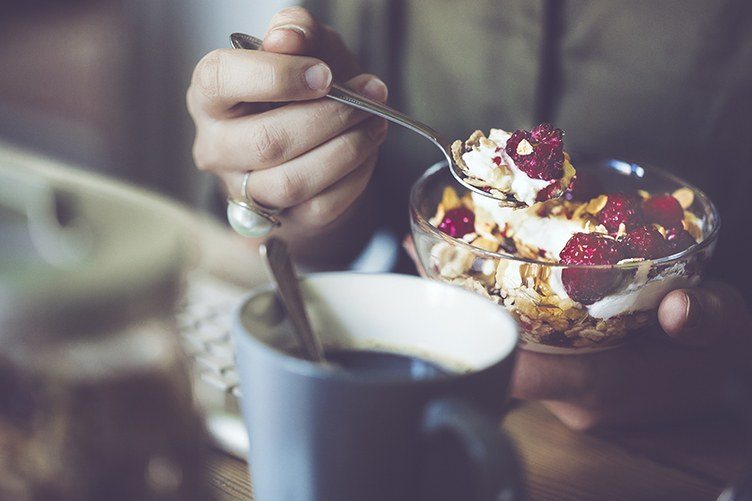 Overnight oats are so yesterday…and not just because you made them yesterday. Muesli is the new cool oat-y kid on the block (at least Stateside; in Europe it’s a common breakfast option). What is muesli? you might be wondering. It’s a lot like granola—a combination of raw oats, dried fruits, and nuts—but, unlike granola, it’s entirely raw and best mixed up with some kind of dairy product. That’s where our buddy comes in: Add Greek yogurt to either homemade or store-bought muesli (you can find it at Whole Foods nationwide), mix it up, and dig in. You don’t even have to wait overnight!

5. MARINATE YOUR MEAT IN IT

Have you ever noticed that yogurt chicken is always super tender? There’s a reason for that: According to Epicurious, the active bacteria in yogurt helps break down the meat, making it a great natural meat tenderizer. Sharp likes to combine Greek yogurt, lemon juice, and dried herbs, then use that mixture to marinate either pork or chicken.

6. STIR IT INTO SOUPS If you want a bit of creaminess (and a little extra protein) in your next soup, top it with a dollop of Greek yogurt. This trick works best in spicy chilis and hearty veggie stews, but you can try it on any recipe you like.

7. BLEND IT INTO GUAC AND HUMMUS (TRUST US)

These tricks are some of Sharp’s favorites. “I add [Greek yogurt] to my guacamole to boost the protein and and stretch the yummy avocado flavor,” she tells SELF. And you can do the same to hummus if you’re looking to eat more protein. Bonus: It gives both of these dips an alluring, tangy bite.

8. USE IT TO MAKE A SLIGHTLY HEALTHIER VERSION OF BOXED MAC AND CHEESE

Yes, there is a way to make mac and cheese healthier, and, of course, it involves Greek yogurt. If you’re making boxed mac and cheese (SELF loves these brands), swap the ’gurt in for melted butter. It’ll still give your pasta that moist, creamy texture, with fewer calories and a tangier flavor.

9. ADD IT TO PANCAKES AND MUFFINS 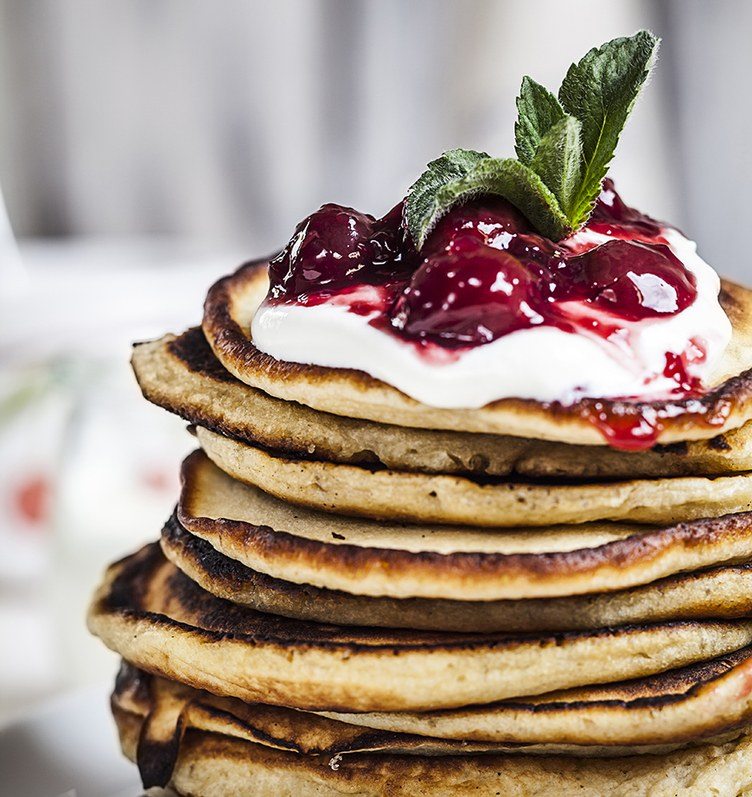 This is a great way to get more protein into breakfast treats that are otherwise low in important nutrients. We especially love the way Crème De La Crumb uses Greek yogurt in this pancake recipe, and how it’s used in these chocolate chip muffins from Well Plated.