I hear this all the time. In a past life, I often said it myself. Actually for most of my life, running was a punishment. Miss a play, run a lap. Let the ball drop, run suicides. Awful. Just awful.

Then I fell in love with running and eventually became a running coach. Now, aside from showing up at a group training session wearing my Running Sucks tank (which I clearly do to taunt my athletes) I don’t utter those two words anymore. Why?

Simple, I stopped doing it wrong.

You may disagree. “I’ve been running since I was 2, I know how to run,” you might say. But if you think running sucks, the odds are it’s because you don’t know how to run.

That’s okay. Because no one actually teaches us how to run. We learn to walk, then walk faster, then pick up more speed. But that doesn’t constitute knowing how to run.

I’ve watched as sprint form is meticulously taught to gym-goers who couldn’t care less about being a sprinter. But say you wanna run your first 5K and you’ll get a pat on the tush as you’re sent out to “just start running.”

But it’s not too late. I’ve watched many unapologetically self-described “non-runners” come to the dark side after making these 5 simple adjustments.

1. Get your chin down. It’s shocking to me how m1any people jut their chins out when they run—as if they’re trying to edge out the competition and break the tape at the finish. All you’re doing is making it significantly more difficult to breathe and creating a ton of tension in your face, neck and shoulders; in running, tension equals wasted energy which makes running suck. Cut it out and keep your jaw level and relaxed. 2. Lose the chicken wings. Repeat after me: You run with your legs, not your arms. Sounds ridiculous but I’ve seen many people run like their arms are doing the work. Scrunching your shoulders up into your ears and forcefully swinging rigid arms back and forth isn’t going to make running enjoyable. Relax and create space between your shoulders and ears. 3. Ban sassy booty. Due to how much we sit, many of us allow our backs to do the job of our core muscles. All. Day. Long. The result? sassy booty (and not in a good way). This form flaw wastes power and energy and is the leading cause of lower back pain among runners. 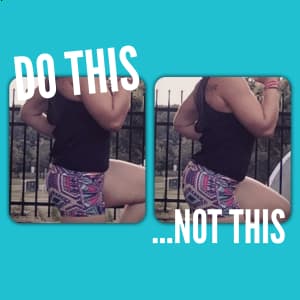 4. Keep your feet under you. Your feet shouldn’t b1e landing out in front of you. Unlike sprinting, the idea in distance running is to keep your knees down and your stride short while turning your legs over quickly. Make this switch and your knees will appreciative it; don’t and you’ll find out why there’s a common misconception that running is bad for your knees. 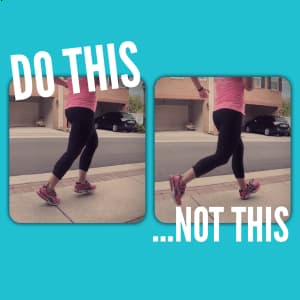 5. Slow down! You should be able to talk without gasping for air every other word while running distance. If you cannot, slow down. No, this doesn’t doom you to a life of being a “slow runner”–speed comes after you’ve learned to run for more than 3 miles comfortably.

Strength training is another way to build a strong running body. AcaciaTV has hours of strength training workouts that’ll help you get more out of your running. Start your 10-day free trial today.

—By Alison Heilig for AcaciaTV.

AcaciaTV is a leading subscription-based streaming fitness service easily accessible on a variety of platforms/devices. Members have complete access to more than 400 workouts in a diverse range of disciplines that they can stream anywhere at any time. AcaciaTV now features new themed 20-minute workouts each month from trainers Kristin McGee, Amanda Young, Deazie Gibson, Gerren Liles and Liz LeFrois. Consumers can visit AcaciaTV at US.Acacia.TV and easily try out the service with its 10-day free trial. The channel is for all fitness levels. Subscription to the service includes access to AcaciaTV’s Facebook fitness community, which offers additional support and a group forum for all members. MyFitnessPal members can receive 25% off any membership for a year with the code acacia4mfp.