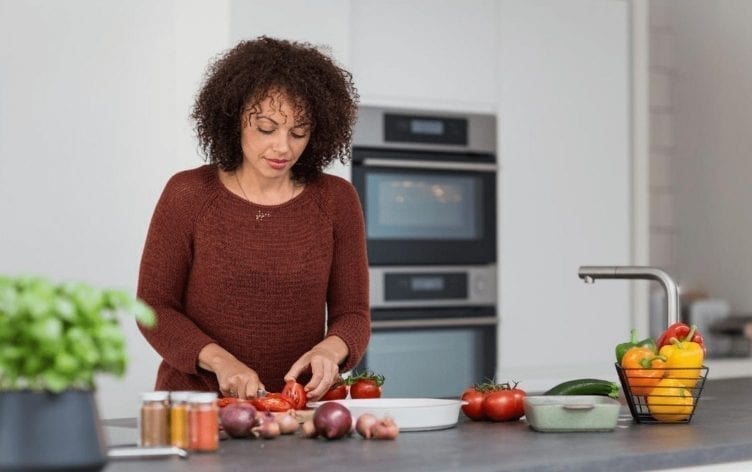 If you’re trying to lose weight, it seems to make sense to cut as many calories from your diet as possible. Unfortunately, it’s possible to eat too little, which not only makes it harder for you to achieve a healthy weight, but it can also cause other health problems. In other words, eating below your needs can backfire big time.

Everyone has a set amount of calories, or energy, they need to simply be alive. Consistently eating less than this can cause your metabolism to slow down and your body to begin preserving what it can to survive. Hunger and feeling full aren’t the only indicators of whether you’re fueling your body appropriately. Indeed, short and long-term dietary restrictions on weight and the traditional weight-loss methods of calorie cutting and deprivation may actually be a hindrance to many health goals.

Beyond calories, I’ve had countless clients come to me after trying fad weight loss diets, none of which “worked” in that any weight lost was regained once they stopped the diet. Diet culture, in general, does a good job of making people feel like failures if they don’t have long-lasting success from a diet when it’s the diet that fails us. There is little to no research showing any fad diet results in sustained long-term weight loss. This is the first thing I explain to clients so they don’t feel defeated or ashamed because they did nothing wrong.

Here are some common signs you’re eating too little to support your body. When in doubt, it’s always a good idea to consult a registered dietitian or health care professional.

YOU’RE THINKING ABOUT FOOD ALL THE TIME

Consistently not eating enough food often results in a preoccupation with food and persistent thoughts about food and your next meal or snack. This could manifest in behaviors like perusing restaurant menus online, obsessing over food social media accounts or watching cooking shows incessantly. The association of dietary deprivation and food preoccupation was first discovered by Ancel Keys in his landmark Minnesota Starvation Experiment during World War II. Many of the participants in the study admitted to obsessively collecting recipes and recipe books, and as the study went on, food became one of the only things they thought about. While this is an extreme example, the chronic dieting and food deprivation so prevalent in today’s culture can absolutely have a similar effect.

“Hanger” is one of my favorite terms for feeling so hungry, you are borderline angry. I’m sure this is relatable to many people, and there is some science to explain it. When you go long periods without eating, blood sugar tends to drop. If you don’t eat something to raise blood sugar, and it remains low, your ability to concentrate, be patient with others and mentally focus diminishes. Enter crankiness, which can easily be reversed by eating something. Tiredness and fatigue also go hand in hand with not eating enough, because you’re simply not providing the body with enough energy. These cues are often our body’s way of innately telling us what we really need.

There is nothing worse than feeling tired but being unable to sleep. This is another common result of dietary deprivation, with research roots dating back to the starvation experiment mentioned above. More recent research from eating disorders and sleep to malnourished infants and sleep further emphasizes the profound effect diet may have on our sleep cycles. What’s more, it has been consistently found that diet restoration and maintaining adequate energy intake may also restore normal sleep-wake patterns.

YOUR WEIGHT PLATEAUS OR INCREASES

When the scale won’t budge or if you start to gain weight while on a diet, the answer is not to eat even less. Instead of providing the body with less energy, perpetuating the metabolic response that fights against weight loss, the solution is often to eat more.

Start by adding a snack or two between meals and make sure to include all of the macronutrients — protein, fat and carbs. Once you’re fueling the body correctly, your weight ends up where it should be.

Chronically undereating won’t help you lose weight, and can often yield the opposite effect as well as lead to nutritional deficiencies. In my experience as a dietitian, having a targeted number on the scale isn’t the best way to achieve weight loss or overall health.

Too often weight-loss goals stem from the desire to look like the extremely narrow version of what society deems as an ideal or acceptable body. In this day and age, we are slowly but surely recognizing the uniqueness of every body and that we are not all supposed to look the same.

What’s more, we know now weight alone is not a reliable indicator of health. With that being said, I’ve had much success reframing clients’ goals around health-promoting behavior changes. This could be eating more vegetables, cooking more at home, going for daily walks, prioritizing sleep, etc.

Instead of weighing yourself to measure progress, try using non-scale goals like reaching for 2–3 servings of vegetables per day or checking in with how you feel — are you more energized and able to play with your children or keep up in that tough workout class? Focusing on this type of progress is much more positive, long-lasting and health-promoting.